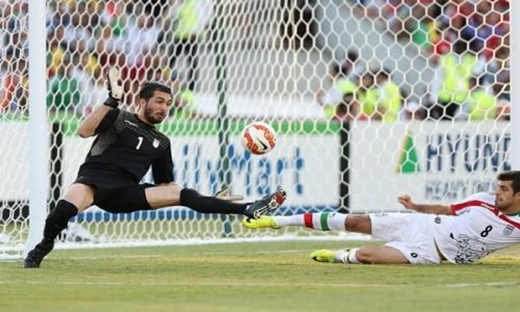 Iran’s national football team has been held to a 1-all draw against Turkmenistan during its first 2018 World Cup qualification match.

The Iranian national football team was held to a 1-1 draw on Tuesday against Turkmenistan to have a disappointing start in FIFA 2018 World Cup qualification.

It was first Iran’s striker Sardar Azmoon who scored on the 4th minute.

Over the rest of the first half, Iran took the lead, but Carlos Queiroz’s men failed to make use of their scoring chances.

However, Turkmenistan gained a scoring chance in the last minutes of the first half and leveled everything.

In the second half, the two teams played a boring game and failed to score a goal and the game finished 1-1.

Iran has been pitted against Guam, Oman and Turkmenistan in Group D of the competitions and is now on the third place of its group with one point from one game.