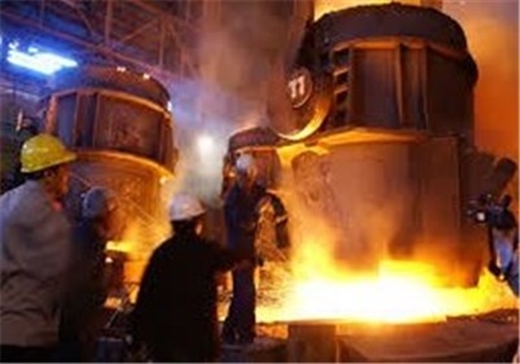 A report by the World Steel Association showed that Iran's steel production output in January-February 2015 increased by 15 percent over last year.

The volume of crude steel produced in Iran in the first 11 months of the last Iranian calendar year (March 2014 to February 2015) witnessed a growth of 8 percent, according to official reports.

A recent report by Iranian Mines and Mining Industries Development and Renovation Organization shows that Iranian steel manufacturers have produced 15,421,059 tons of steel in the said period.

The figure shows an 8-percent rise compared with the volume of steel produced in the same period the previous year, which amounted to 14,310,590 tons.

The report also indicates that 15,685,291 tons of different steel products were manufactured in the country from March 2014 to February 2015, showing a 4-percent increase compared with the 15,148,558 tons produced in the same 11 months the year before.

Iran is reportedly the biggest steel producer in the Middle East and North Africa. The country’s main steel production facilities are located in Isfahan and Khuzestan provinces.