Iran’s Azmoun Admired by FIFA after Stunning Goal against Bayern 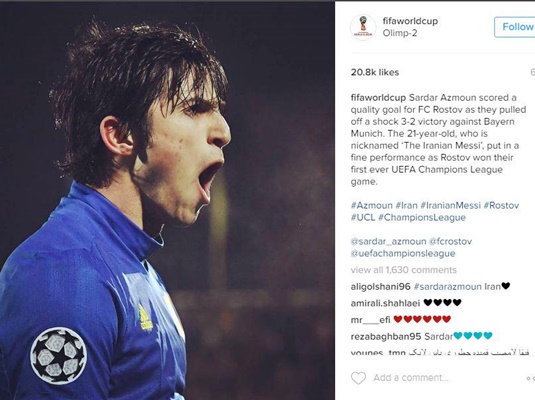 FIFA wrote in its official Instagram page, “Sardar Azmoun scored a quality goal for FC Rostov as they pulled off a shock 3-2 victory against Bayern Munich.”

“The 21-year-old, who is nicknamed ‘The Iranian Messi’, put in a fine performance as Rostov won their first ever UEFA Champions League game,” the FIFA page added.

After leaving Boateng sprawled on the floor, Azmoun showed great composure to slot home past Sven Ulreich just before half-time to set Rostov on its way, Tasnim reported.

Dmitri Polov and Christian Nobea scored the Russian side’s goals in a famous win, while Juan Bernat and Douglas Costa were on the target for Bayern.

Meanwhile, Metro quoted Liverpool fans as saying to Azmoun that “Get to Liverpool now!”

The Reds fans raved over Azmoun as he channeled his inner Leo Messi, Metro said, adding that Azmoun has been turning heads in the Champions League this season with a series of dazzling performances.

His displays have attracted the attention of Liverpool, who were linked with a January bid for the forward’s services earlier this month, and on Wednesday night he stretched the Messi comparisons even further.

Because he only went and paid homage to one of the little magician’s finest ever goals.