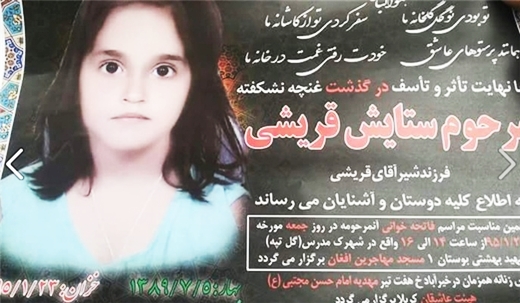 As reported by Tasnim News, the news of the murder of a 6-year-old Afghan girl has broken the hearts of both nations.

Almost 5 days ago, the girl went missing. For the people who live in this part of the world, when a girl goes missing it is a reminder of painful, historical events. A few days later her family received the worst news. Setayesh wasn’t alive anymore. She had been horribly murdered.

The story is extremely sensitive and can inflame old hatreds. Those who seek to raise divisions between the two nations are waiting for such inhumane crimes to fan the flames between the nations. Rumours are spread. This mission, however, failed this time. The story turned out differently, and in fact, created unity and sympathy between Iranians and Afghans.

The case progressed quickly with the help of local Iranians. The mystery of the Afghan girl’s murder was solved with Iranian cooperation. The Iranian friend of the culprit found out about the killing, and informed his father. Quickly, the father informed the city’s Imam Jome [The Mullah in charge of Friday prayers], and within a few hours, the police have found and arrested the murderer.

Right after this, the sympathy and unity are clear to see. A big group of Iranian locals pay a visit to Setayesh’s family to let them know that they will stand with them. In another admirable decision, representatives from the Immigration Office, the local governor, Police, and Ministry of Interior send their condolences and sympathy to the Qureishi family, letting them know that they will stand by them to see that justice is served.

The neighbourhood Iranians come together and construct condolences boards to console the broken hearts of the Afghans. The destiny of the two nations are so entwined that it seems like the Iranians have lost their own girls.

Afghans and Iranians gather together. The differences between them have lost their meaning now. Finally, the funeral of Setayesh Qureishi, the Afghan girl (or perhaps better, the Afghan-Iranian girl) takes place. The following is a report of an Afghan woman who was present at the funeral:

“Today was the funeral of an innocent girl whose murder brought the immigrant society together, regardless of their religion or race. I remembered when I heard from the neighbourhood mosque that a girl had gone missing, I hoped that, like in childhood stories, she’d be found and be home in a few hours. She never did, however. What happened to her breaks any human’s heart, but how a teenage boy can commit such a horrible murder is the responsibility of psychiatrists and sociologists. Today, however, was one of the most beautiful days which showed the unity of the immigrants and the Iranians. The ceremony after the funeral was held in two different neighbourhoods for men and women. The same morning, I paid a visit to the Imam Jome’s office. He is a very honest man who has always been very close to the immigrants living in the neighbourhood. He condemned this terrible event too, and said that what had happened has nothing to do with nationality or religion. It has broken the hearts of all of us.

“Iranians said that if it was necessary, they would sell their jewelry to make sure Setayesh and her family’s rights aren’t ignored.”

“At noon, I went to the ceremony hall. Ladies arrived one after another, from all nationalities or ethnicities. Many Iranians were present at the ceremony with tearful eyes from the very beginning, as if Setayesh had been their own daughter. They all condemned the crime, and were asking for legal punishment. Amazingly, Iranian woman were saying that if it were necessary they would sell their jewelry to make sure Setayesh and her family’s rights aren’t ignored. They all were there to lift a burden from Setayesh’s family. It was great to see hope in her family’s face.

“Setayesh’s family depended on your kindness. Kind-hearted people came from all different parts of Tehran to join the sea of kindness and unity.

“The story is different from what is seen on social media. Iranian women were ready to sell their jewels to pay for the cost of a lawyer, but there are still rumours spread saying that Setayesh’s family were not allowed to have a ceremony. There was a glorious ceremony yesterday, many people came and went. The Imam Jome gave a speech. Representatives from different authorities came and gave their condolences. Despite all that, there are still rumours saying that the story has not been covered by the media, that the murderer is free, and so on. They are trying to sever the unbreakable links of the two nations, but it will never happen.”