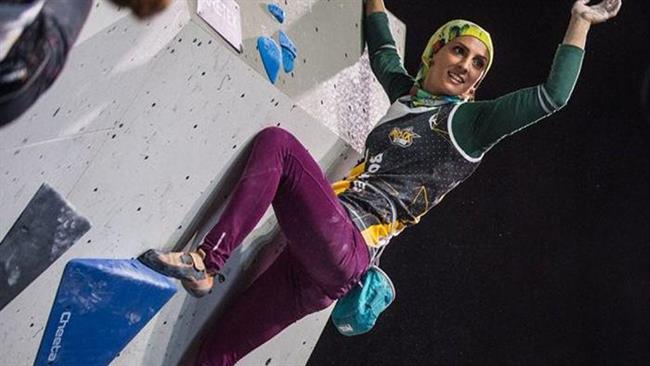 Iranian rock climber Elnaz Rekabi has been crowned as the champion of Asia Cup – Wanxianshan 2017 in China, and clinched a gold medal at the prestigious sports event.

Earlier in the tournament, Rekabi had grabbed the bronze in the women’s lead competitions.

Speed climbing is a race in its purest form. Two contestants face each other while moving up the ice in this disciple, and the faster climber wins.

Bouldering is a form of rock climbing that is performed without the use of ropes or harnesses. Most climbers, however, use climbing shoes to help secure footholds, chalk to keep their hands dry, and mats to prevent injuries from falls.

Lead climbing, on the other hand, emphasizes on strength and techniques. Climbers go up the ice alone and try to reach a specific end point within a given amount of time.

To practice the sport at the highest level of competition, it takes athletes with strategic insight, power, precision and full commitment.