Iranian woman killed in hit and run in Canada 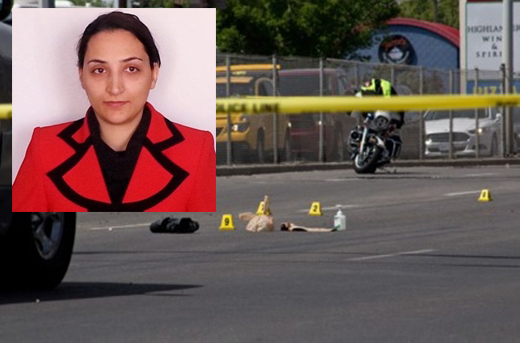 Maryam Rashidi, an Iranian woman, was run over in Calgary while trying to stop a stolen truck from fleeing with unpaid gas. She succumbed to her injuries two days later in the hospital.

Maryam Rashidi, an Iranian woman who was a resident of the Canadian city of Calgary with her husband and six-year-old son, was killed after two young thieves ran her over in a gas station she worked for.

Fararu on June 13 released a report on the death of Maryam, 35, a chemical engineer from Sharif University of Technology, who migrated to Canada a year ago. The following is the translation of the report:

Maryam moved to Canada last year after graduation and working at Bandar Imam Petrochemical Company. She was killed in a hit and run last Sunday [June 7] after she tried to stop two thieves in a stolen pickup truck from driving away without paying.

Maryam’s husband Ahmad Shamloo, an oil and gas expert from University of Tabriz, says, “I received a telephone call on Sunday and was told that my wife was in the hospital due to serious injuries she had suffered. I rushed to the hospital only to find my wife in coma.”

On that fateful day Maryam gave chase after the gas-and-dash at the station and stood in front of the truck to try to block it from leaving. She was hit and carried along on the hood before she fell off and was run over, according to her husband.

The police have confirmed that the woman has died of her injuries in hospital two days after the incident on Tuesday.

Police also said they have taken into custody two persons of interest after checking the footage of CCTV at the gas station, adding that an investigation has been launched into the incident.