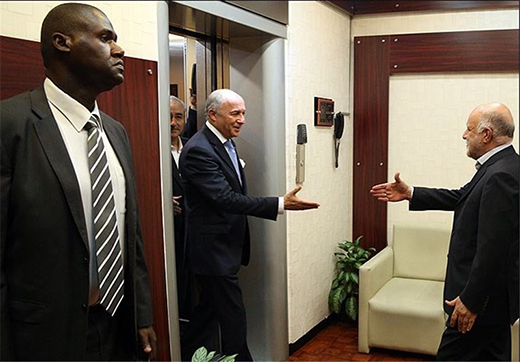 Iran’s oil chief has said that his ministry is planning to open a new chapter in cooperation with the French energy giant, Total, for the development of Iranian oil fields.

During the meeting in Tehran on Wednesday, the two sides highlighted the necessity of boosting oil and gas cooperation between Iran and France with Fabius indicating his country’s willingness to take part in Iran’s petrochemical projects.

Speaking to reporters after the meeting, Fabius said Paris seeks to restore its historical ties with Iran and become an “important trade partner for Tehran.”

Also, Zanganeh told reporters he and Fabius highlighted the necessity of boosting oil and gas cooperation and the French side has indicated its keen interest in taking part in Iran’s petrochemical projects.

He also noted his ministry is planning to open “a new chapter” in cooperation with the French energy giant, Total, for the development of Iranian oil fields.

Upon his arrival in Tehran, Fabius announced that a “very important” delegation of French businessmen will pay a visit to Tehran in the near future.

He declared that the economic delegation will include several French companies and is scheduled to arrive in Iran in September.

Fabius’s remarks came as he arrived in Tehran two weeks after finalization of the text of a nuclear pact between Iran and major world powers that put the spotlight on the Islamic Republic.