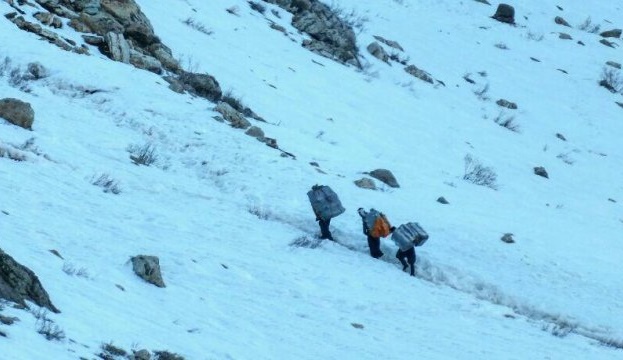 Some 120 lawmakers have signed a parliamentary motion aimed at improving the lives of border residents and couriers.

Those who have drawn up the motion have tagged it with a double urgency status now that the tragic death of five cross-border couriers has roused the emotions of the Iranian nation.

Sixteen cross-border back carriers were buried under avalanche and five of them lost their lives in the city of Sardasht in West Azarbaijan Province on January 28.

These border couriers, referred to as kulbaran in Kurdish, are people of mainly Kurdish-dominated provinces of West Azarbaijan, Kermanshah and Kurdestan, who carry contraband on their backs through mountainous areas to earn their livelihood.

They usually carry the goods from areas bordering Iraq and Turkey to the nearest villages in Iran and from there the goods are transported to cities by road.

“All the identified border couriers will form a single cooperative,” based on the parliamentary motion and “up to 30% of border trade will be carried out by this community. The cooperative will be subject to tax exemption until the couriers achieve full empowerment,” the Persian daily Shargh reported.

“The proposal makes a clear distinction between cross-border back carrying and smuggling,” said a parliamentarian from West Azarbaijan Province, Abdolkarim Hosseinzadeh.

“Cross-border back carrying will remain the only way for border residents to earn their livelihood unless a decent work condition is created there.”

Priorities highlighted in the proposal are border provinces of West Azarbaijan, Kurdestan, Kermanshah, Ilam and Sistan-Baluchestan and the border areas of Piranshahr, Marivan, Oshnavieh, Javanroud, Baneh and Sardasht.

“The Ministry of Cooperatives, Labor and Social Welfare will insure border couriers and the Ministry of Industries, Mining and Trade must invest 10% of the country’s total credit facilities in border areas,” Hosseinzadeh said.

“The ministries of economy and foreign affairs should take measures to guarantee the security of border areas in cooperation with neighboring countries, namely Turkey, Iraq and Pakistan, and pave the way for transforming the border towns to commercial areas.”

Rasoul Khezri, a representative of Sardasht in the Iranian Parliament, who has helped prepare the bill, criticizes the performance of law enforcement officials at border points and said the police crackdown on border couriers is violent at times.

“Recently police shot and injured several of these people who were not even carrying goods in Piranshahr,” Khezri said, noting that he has called for explanations from Minister of Interior Abdolreza Rahmani-Fazli in this regard.

According to both lawmakers, almost all cross border back carriers work for a handful of traders who do not even reside in border towns and have managed to win permits for movement of goods through “special connections”.

“The proposed bill will fail to produce desirable results unless we get in the way of these people. You can be sure that in the end, special people with special connections will be laughing all the way to the bank,” the Persian daily Iran quoted Khezri as saying.

The duo also believe that the only lasting solution to curb phenomena such as cross-border back carrying is development of industrial and trade zones and different industries, but they also stress the fact that border residents should enjoy better economic security under the current circumstances.