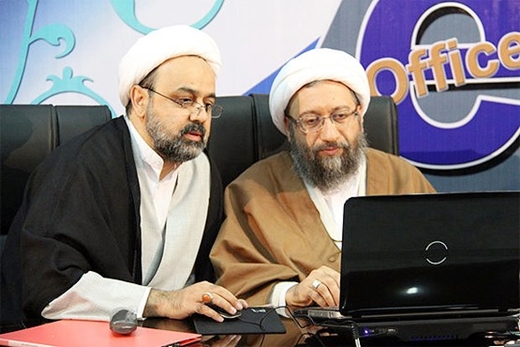 A Judicial official has said that the Iranian judges can log onto the Judiciary’s social networking site and have online interaction with fellow justices.

Iranian judges can chat online and share their scientific, professional and personal experiences with their colleagues.

Head of the Judiciary’s Center for Statistics and Information Technology,Hamid Shahriari, said that the judges can log onto http://www.iadl.ir and have online interaction with fellow justices. The following is the translation of what else jamejamonline.ir quoted the judicial official as saying:

Shahriari said that the judiciary website at http://www.iadl.ir provides judges and the Judiciary staff with the opportunity to tap into the potential of information and communication technology and share their experiences.

He further said that the website – which was launched in September 2014 – helps the users chat online and offline, take part in joint Q-and-A sessions, standardize written texts shared by judges and judicial personnel, exchange views, and make use of collective consultation opportunities.

The Judiciary has paved the way for its offices to get connected around the country, boosting efforts to monitor the performance of its judges and create integrated procedures which are carried out speedily and in keeping with similar guidelines, he said.

The Judiciary aims to create a social networking site with the following capabilities: personal pages, online chat, and forums for judges, provision of helpful scientific materials, he added.

Shahriari went on to say that those who log onto the Judiciary’s social networking site will be given an OTP (one-time password [which is valid for only one login session or transaction]) which is sent to their cell phones.  […]

He also said that more than 2,600 judges from 12 provinces have so far registered on the social site and the registration process is underway for other provinces in the country. […]