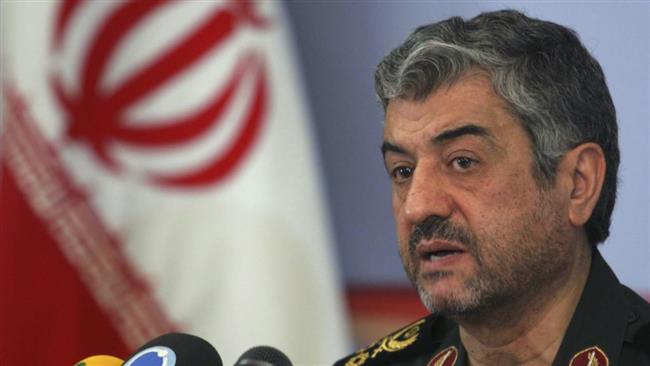 IRGC Commander Major General Jafari has said that enemies made great efforts to render Iran insecure, but all such plots have been thwarted thanks to efforts of the country’s security forces.

A senior commander of Iran’s Islamic Revolution Guard Corps (IRGC) has said the country’s security forces have managed to foil all attempts by enemies aimed at destabilizing the country.

IRGC Commander Major General Mohammad Ali Jafari said Friday that the country’s enemies have sought to create instability in Iran like the recent deadly terrorist attacks in France, but they failed.

“Enemies made great efforts to render our country insecure as well but all such plots have been thwarted thanks to strength and efforts of our security forces,” he said.

The IRGC commander further said enemies mainly intend to target the Islamic Revolution and the Islamic Republic, but they have come to an understanding that they cannot use a language of force against Iranians.

“They admit that the Islamic Iran is currently a regional superpower,” Jafari added.

The Iranian commander made the comments during major military drills attended by 120 battalions from Iran’s volunteer forces, Basij, on the outskirts of the central city of Qom.

He said that safeguarding the Islamic Revolution is one of the messages of the large-scale maneuvers.

“We should update our power” as the nature of threats against the Islamic Ummah is changing, the commander said, adding that the ongoing maneuver is an exercise to counter possible “extra-regional threats and proxy wars against our country.”

Iran has conducted several drills to enhance the defense capabilities of its armed forces and to test modern military tactics and equipment.