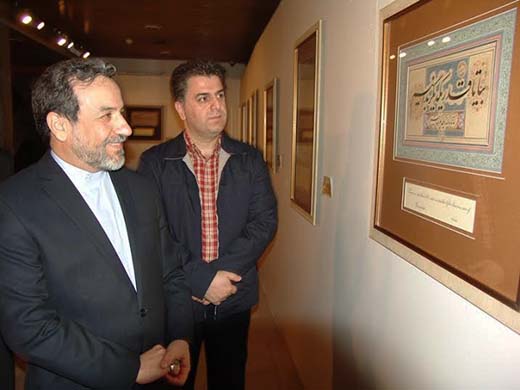 The exhibition is a valuable cultural initiative to promote peace and to counter war and violence, Abbas Araghchi, a deputy foreign minister, said.

A weeklong exhibition which put on display the works of Iranian calligrapher Hadi Darban, both in Persian and English with a message of peace, was held at Tehran’s Niavaran Cultural Center last week.

The following is the translation of a report on the expo published by Iran Student Correspondent Association (iscanews.ir):

After a visit to the exhibition, Deputy Foreign Minister for Legal and International Affairs Seyyed Abbas Araghchi said, “Depicting the concept of peace in world literature is innovative, and at the expo excerpts of literary works from different nations and internationally respected poets and prophets can be seen.”

Araghchi added, “The exhibition is a valuable cultural initiative to promote peace and to counter violence, massacre and war. It can help fight extremism and violence throughout the world.”

Deputy Foreign Minister for Euro-American Affairs Majid Takht-e Ravanchi, who also visited the expo, said, “The message of peace and friendship is clearly promoted by our religious teachings. The expo features quotes on peace and friendship by Persian poets as well as religious leaders and scholars. Remarkable topics have been chosen; beautiful handwriting and magnificent illuminated manuscripts as well as translation of the quotes for those who do not know Persian can be very useful.”

After inspecting the expo, Sadegh Kharrazi, another veteran diplomat, said, “Today’s world needs peace. Mankind cannot experience security and serenity without peace. All divine religions and cultures identify peace as a lasting virtue. The artist who has identified what today’s world needs and taken the initiative to create works of art with a global impact is admirable.”