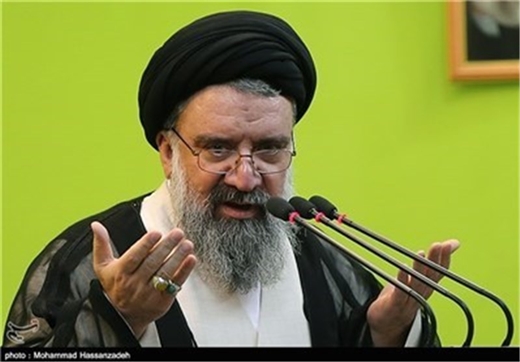 A senior Iranian cleric has said that the enemies should know that the Islamic Republic of Iran – if attacked – would chase the enemies deep into their territory.

Tehran’s Friday Prayer Leader Ayatollah Ahmad Khatami slammed US officials for their repeated military threats against Iran, saying that Tehran’s response to such aggression would be crushing.

Back on July 25, US Secretary of State John Kerry said that US President Barack Obama “has made it pretty clear that Iran will not get a nuclear weapon. He’s prepared to use military force, if necessary, in order to prevent that.”

Speaking to a large congregation of worshippers in Tehran, Ayatollah Khatami referred to the remarks as “worn-out”, adding that the US officials have repeatedly made similar threats since the victory of the Islamic Revolution in 1979.

“We would not welcome any war, but if Americans want to try their chance once again, they should not hesitate,” he said, adding, “They may bring their warriors with aircraft, but they would return to their cities with coffins.”

“Even in ground offensive,” the Iranian cleric added “they (enemies) should know that the Islamic Republic of Iran would chase enemies deep into the enemy’s territory”.

Earlier in May, Supreme Leader of the Islamic Revolution Ayatollah Seyyed Ali Khamenei reaffirmed that the Iranian nation will not let any possible act of aggression against the country go unanswered.

The Leader said he has already made it clear, even when the former US president was in power, that “the era of hit and run has ended”, and that the Iranian nation will chase aggressors.