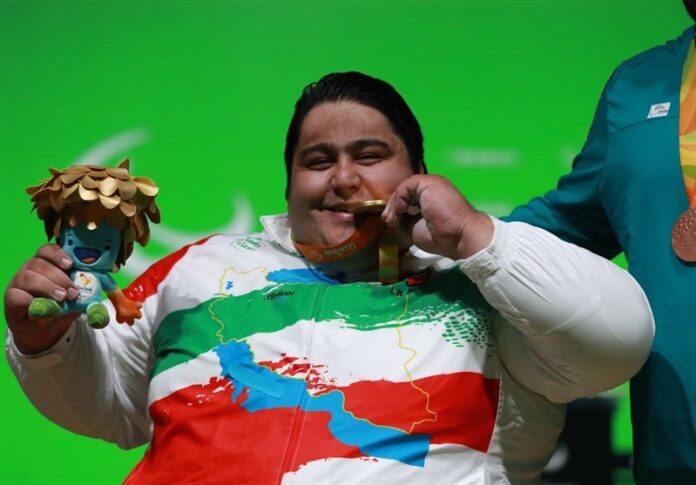 Iranian Paralympians in power-lifting, shooting, and javelin throw won 2 gold and one silver medals in the ongoing Rio 2016 Paralympics.

Iran’s Siamand Rahman wrote his name into the history books after doing what no man had ever done before – he cleared the bar at 310kg in the men’s over 107kg, setting a new world record and claiming his second consecutive Paralympic gold.

The world’s strongest Paralympian, who had lifted 296kg at a World Cup in Dubai, the United Arab Emirates, last February, was widely expected to break the 300kg barrier after years systematically improving his marks.

Rahman won gold at London 2012 with a 280kg lift. Two years later, he registered 285kg at the World Championships in Dubai, the United Arab Emirates, and 290kg at the Asian Para Games in Incheon, Korea.

In Rio, the 28-year-old proved again that nothing can stop him in front of a noisy crowd that had gathered to witness the historic moment and never stopped chanting “Iran, Iran”.

“I feel very happy and proud for having broken the 300kg barrier and for being the strongest Paralympian in the world,” said Rahman afterwards. “I want to be an inspiration for all people with impairment who stay at home and don’t lead an active life, and especially for the youth.”

In the competition took place at the Olympic Shooting Centre in Deodoro, Javanmardi wrapped up her second gold medal in what was enthralling final for fans.

Javanmardi set a new finals Paralympic record (189.5) at the P4 – Mixed 50m Pistol SH1 en-route to winning her second gold of the Games.

The silver medal went to China’s Chao Yang who finished with 186.5 points ahead of young Ukrainian Oleksii Denysiuk on 160.8.

“I’m very happy that I could get a very good result in this event,” said Javamardi. “Besides a gold medal in 10m air pistol, one of my biggest wishes was to get a gold medal in 50m as well and I achieved this!”

At the javelin F13 in the Paralympic Games, Sajad Nikparast also managed to win a silver medal on Wednesday.

Iran’s reigning Paralympic silver medallist Nikparast claimed the silver with a throw of 62.74.

Iran has participated at the 2016 Summer Paralympics with 111 athletes in 12 sports, Tasnim reported.