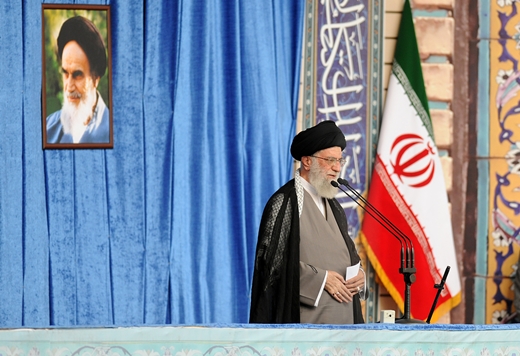 Leader of the Islamic Revolution Ayatollah Seyyed Ali Khamenei says Iran will never bow to excessive demands over its "defense and security" capabilities.

“Amid an atmosphere of threat the enemies have created, as far as safeguarding its defense and security capabilities are concerned, the Islamic Republic will never bow to the enemy’s excessive demands,” Ayatollah Khamenei said in a sermon to worshippers at the Eid al-Fitr mass prayers marking the end of the fasting month of Ramadan on Saturday.

The Leader added that whether the text of the nuclear conclusion, recently reached with world powers, is approved or not, Iran will never allow any “exploitation” of it.

“God willing, the country’s defense capabilities and security privacy will be safeguarded. No one will be allowed to harm the fundamental principles of the Islamic establishment,” Ayatollah Khamenei pointed out.

The Leader further emphasized that the latest round of negotiations between Iran and the six world powers and the text of the nuclear conclusion would never lead to a change in the Islamic Republic’s policies towards the “arrogant US government.”

The US policies on regional issues are exactly on the opposite site to those pursued by Iran, Ayatollah Khamenei said.

He said that the Americans accuse Lebanese resistance movement Hezbollah and the anti-Israeli axis of resistance, which are the most dedicated national defense forces, of terrorism while they support the “Zionist, terrorist and infanticidal” Israeli regime.

“How can one negotiate, deal and reach an agreement with such a government (US)?” the Leader asked.

The Leader said American officials have been engaged in ranting following the end of nuclear talks between Iran and the P5+1 countries due to internal problems inside the United States, adding, “The fact is something else.”

The US officials claim that they have blocked Iran’s alleged development of nuclear weapons, the Leader stated, noting that the Islamic Republic, based on Quranic teachings, regards the production and stockpiling of nuclear weapons as forbidden.

“This has nothing to do with the negotiations,” Ayatollah Khamenei said.

The Leader added that the US officials would never realize their dream of forcing the Iranian nation to surrender.

The US is still making “big mistakes” on different regional issues, particularly on its behavior towards the Iranian nation, the Leader said.

“Wake up and realize the fact!” said Ayatollah Khamenei.

“The Islamic Republic…is strong and is becoming stronger day by day,” said the Leader.

He said the six world powers have been making efforts over the past 10-12 years with the purpose of bringing a halt to Iran’s nuclear industry but they finally had no option but to “tolerate” thousands of centrifuges in Iran and the continuation of the country’s research and development plan.

“This is the outcome of the Iranian nation’s resistance and bravery and the creativity of dear Iranian scientists,” the Leader said.

The Leader added that US President Barack Obama has claimed that he can “destroy” the Iranian Army.

Ayatollah Khamenei said if the US officials want to correctly use their experience, they should know that “Iran welcomes no war and will initiate no war. But in case of any war, the aggressive and criminal US” will emerge loser.

The Leader noted that Iran would never negotiate with the US on mutual, regional and international issues and said, “We sometimes held negotiations [with the US] on exceptional cases such as the nuclear issue based on the [national] interests.”

The Leader further emphasized that whether the text of the nuclear conclusion is approved or not, Iran would never stop its support for “our friends in the region.”

Ayatollah Khamenei emphasized that Iran will always support the oppressed Palestinian, Yemeni, Iraqi and Bahraini people as well as the Syrian nation and government and fighters of the resistance movement.

The Leader also expressed gratitude to the Iranian nuclear negotiating team for holding “lengthy and breath-taking talks” with the P5+1 countries in Vienna and said the country’s officials are expected to heed national interests in reviewing the final text adopted in the Austrian capital.