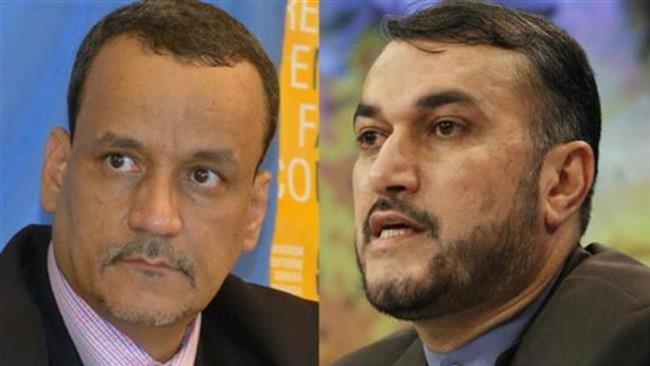 A senior Iranian official has warned against rising terrorism in Yemen, calling for more concerted efforts to open dialog and end the war in the violence-wrecked country.

Amir-Abdollahian said the humanitarian situation in Yemen is worsening as a result of the continued airstrikes against the country, adding that in addition to aid raids, “We are witnessing increasing growth of terrorism in south of Yemen.”

He voiced Iran’s support for efforts by the UN envoy aimed at finding a political solution to the crisis in Yemen and start dialog among Yemeni factions.

The UN envoy, for his part, praised Iran’s constructive approach toward fighting terrorism and supporting a political trend in Yemen.

Ahmed said the UN has launched a fresh round of efforts to broker peace talks among Yemeni groups.

The UN attempts to settle the crisis in Yemen through political approaches have so far failed. In December 2015, Houthi Ansarullah movement and members of the former Yemeni regime held inconclusive talks in Switzerland, which was coincided with the implementation of a UN-brokered truce that was mainly violated by Saudi Arabia.

The Ansarullah fighters say Saudi Arabia and the former regime’s loyalists used the negotiations as a cover to intensify their attacks and kill more civilians. They say Riyadh has even stepped up its aggression following the ceasefire.

More than 8,278 people have been killed and over 16,000 others injured since the onset of the Saudi attacks.