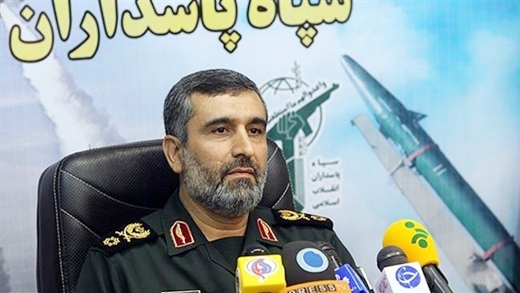 Iran has never suspended its ballistic missile programs and a massive missile maneuver will be held in the near future, said Brigadier General Hajizadeh.

A senior commander of the Islamic Revolution Guard Corps (IRGC) has said that Iran is set to hold a massive ballistic missile maneuver in the near future.

On Friday, Commander of the Aerospace Division of the IRGC Brigadier General Amir Ali Hajizadeh said that Iran has never suspended its ballistic missile programs, adding that a massive missile maneuver will be held in the near future to show Iran’s military power to enemies.

The senior military official further rejected claims that the IRGC has called off its ballistic missile program and drills or bargained over such issues, saying the defense development remains on the agenda of the forces, and that the IRGC’s missile maneuvers have continued and will continue as planned.

The Islamic Republic will press ahead with its missile program and has clinched important victories in this field over the past two years, he said.

During nuclear negotiations between Tehran and P5+1 – the US, Britain, Russia, China, France and Germany – the six states exerted pressure on Iran over its military capabilities.

Iran, however, said it would only discuss its nuclear program and that its missiles are solely used as a deterrent against any potential foreign aggression.

Under JCPOA, among other things, Tehran and P5+ 1 agreed that an embargo on Iran’s import and export of conventional arms and ballistic missiles will eventually be lifted.

Iran’s Defense Minister Brigadier General Hossein Dehghan hailed the preparedness of the country’s armed forces in the face of enemy threats, saying they are fully ready to ward off any act of aggression against the country in the quickest time possible.

Dehghan made the comments in an address to worshipers before the Friday prayers sermons in Tehran.

The Iranian defense chief further emphasized the country’s defense doctrine, saying the Islamic Republic has never intended to attack any country in and outside the region, but it is ready to give a crushing response to the aggressors.

Dehghan also hailed the self-sufficiency of Iranian armed forces in the development of defense systems, saying, “Our industrial power allows us to design and mass produce any system without the help of foreigners.”

In recent years, the Islamic Republic has made major breakthroughs in its defense sector, but it has repeatedly said that its military might poses no threat to other countries, reiterating that its defense doctrine is merely based on deterrence.