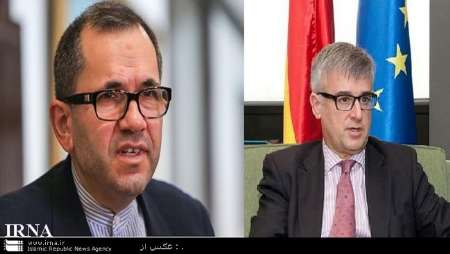 During the meeting on Friday night, Takht-Ravanchi pointed to the two countries’ age-old relations and the positive image of Spain before the Iranian officials and people, and underlined the need for the broadening of ties between the two countries in political, economic and cultural fields.

The Spanish deputy foreign minister, for his part, said that his country is pursuing the constructive dialogue with Iran in all areas, especially in economic cooperation.

Takht-Ravanchi arrived in Spain on Thursday for a periodic diplomatic dialogue with Spanish officials on ways of consolidating bilateral ties.

Iranian and Spanish foreign ministry officials meet and confer with each other every six months to hold diplomatic talks.

In a relevant development earlier today, Takht-Ravanchi met with the Spanish Foreign Minister José Manuel García-Margallo, during which the two sides exchanged viewpoints on bilateral ties, regional and international developments.

Ravanchi reiterated that the two countries’ relations are as deep as history, adding that the Spanish government and nation enjoy a special status in the Iranian public opinion.

He welcomed the Spanish companies’ broad presence in the post JCPOA atmosphere Iran in which the presence of three Spanish ministers in Iran has marked a turning point in bilateral ties and signaled the two sides’ merchants, industrialists and businesspeople positively.

The two sides meanwhile were agreed that the fields of bilateral cooperation include infrastructures, transportations especially in rail field, express trains, agriculture, mining and energy fields.

On the Syrian crisis, he referred to the ongoing human catastrophe there and expressed hope that all regional and trans-regional players involved in it will both contribute to the implementation of the ceasefire and facilitate the humanitarian contributions.

‘Such an approach will pave the path for the beginning of the political talks and decision making on the future of Syria by the Syrian people themselves,’ he said.

The deputy foreign minister meanwhile noted that the continuation of massacring the innocent Yemeni people is occurring amid the silence of the international society.

‘The situation is very awe-inspiring there and it is a grave mistake made by certain countries that have assumed the elimination of a huge portion of the Yemeni people is possible, as that is a hallucination which will never be materialized in the real world,’ he emphasized.

The Spanish top diplomat, too, in the meeting remembered the good memories of his memorable and very successful recent visit of Iran and expressed delight over Iran’s investment in Spain’s refinery industry section.

‘The Spanish government supports the private and industrial sectors involved in that process,’ he said.

José Manuel García-Margallo meanwhile called the international agreement on need for forwarding humanitarian aids for the war-stricken Syrian nation and expressed hope that relying on both sides’ cooperation, as well as the other regional countries’ assistance peace and stability will once again return to Syria and the terrorists will be uprooted there.

He also expressed deep regret over the lingering human catastrophe in Yemen, reiterating that Madrid has done all its best through both the European and the international channels aimed at progressing with the political process in Yemen.