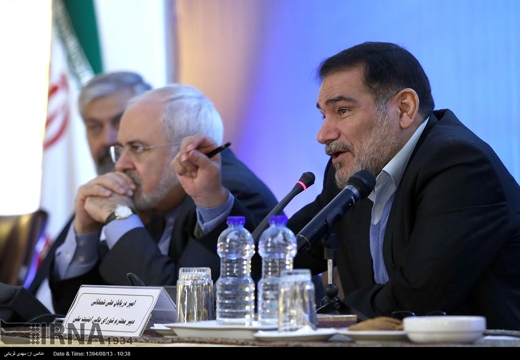 Most of Iran's political activities in the post-JCPOA era have been focused on the promotion of regional cooperation, Shamkhani said.

In an annual gathering of Iranian ambassadors and heads of the country’s diplomatic missions across the world Wednesday, Secretary of the Supreme National Security Council Ali Shamkhani described the Fight against Global Arrogance as the underpinning policy of the Islamic Republic.

What comes next is the translation of part of his remarks as reported by khabaronline.ir on November 4:

– The major mission of the heads of diplomatic missions abroad is to tap into diplomatic potential and to take the initiative in areas which are instrumental in the country’s national security.

– Effective use of the Leader’s unwavering support for the Iranian diplomatic apparatus and the success resulting from the policy of constructive interaction, along with tapping into new regional and international opportunities created following the conclusion of the Joint Comprehensive Plan of Action (JCPOA) requires tireless efforts by the foreign policy machine.

– The 9-point guidelines issued by the Supreme Leader along with the decisions of parliament and the Supreme National Security Council have created a solid framework for executive officials on how to follow up and wisely implement JCPOA.

– Sudden and unpredictable changes in regional equations have resulted in replacement of strategies with processes and this has complicated the role of crucial components in current developments.

– Emergence of fast-paced developments and the physical and arms losses terrorist groups have suffered across Syria of late showed that the US-led coalition involving 60 countries only sought to control and not counter terrorism and lacked any operational value.

– The strategy shift by America and Britain and their decision for continued presence in the region through establishment of new bases will give rise to growing regional instability and insecurity in the future.

– Most of Iran’s political activities in the post-JCPOA era have been focused on the promotion of regional cooperation. The country carries on with that trend to decrease disagreements and ease growing insecurity, promote understanding along with cooperation, and counter divisions provoked by trans-regional powers.

– Thanks to concerted and tireless efforts of different entities, particularly those active in areas such as foreign policy, security, defense and culture along with the success secured in nuclear talks with P5+1, Iran enjoys a unique position in terms of authority, stability and independence.

Shamkhani also answered a number of questions asked by participants on the Syrian crisis, the Russian military intervention in the Arab country, challenges that may come along in the implementation of JCPOA, and developments of Iraq and Yemen.