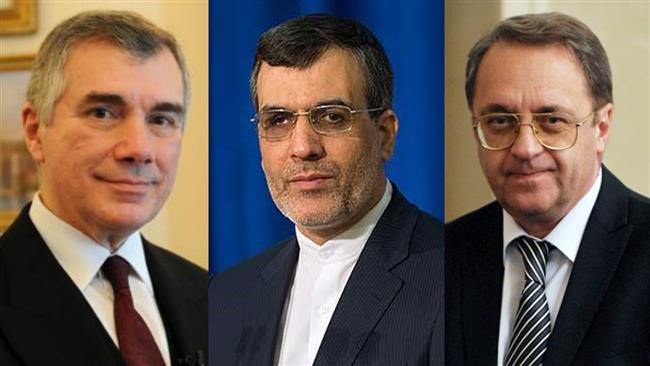 Iranian Deputy Foreign Minister for Arab and African Affairs Hossein Jaberi Ansari has held meetings with senior Russian and Turkish officials on the resolution of the years-long crisis in Syria.

Ansari arrived in the Russian capital Moscow on Friday and first held a meeting with the Russian deputy foreign minister and special presidential envoy for the Middle East and North Africa, Mikhail Bogdanov, to discuss the latest developments on the Syrian crisis and coordinate upcoming peace talks due to be held in the Kazakh capital Astana later this month.

“The two diplomats stressed the importance of maintaining close dialogue between Moscow and Tehran on the Syrian crisis and on other current issues of the regional agenda,” a statement released by the Russian Foreign Ministry said on Friday.

It added that the two officials had also discussed the prospects for the resumption of comprehensive intra-Syrian peace negotiations in Geneva, Switzerland.

The senior Iranian diplomat and Iranian Ambassador to Russia Mehdi Sanaei then took part in a trilateral meeting with Bogdanov and Turkish Deputy Foreign Minister Ahmet Yıldız to discuss the Astana talks that have been scheduled for January 23 in the wake of a nationwide Syria ceasefire brokered by Russia and Turkey last month.

Russia, Turkey and Iran will mediate the forthcoming peace talks that will be held between representatives from the Damascus government and dozens of foreign-sponsored opposition groups.

The ceasefire, which was endorsed by the UN Security Council on December 31, and the crisis resolution talks exclude the Daesh and Jabhat Fateh al-Sham Takfiri terrorist groups.

The Friday talks came after a trilateral meeting between the foreign ministers of Iran, Russia and Turkey in Moscow on December 20, when the three sides agreed on steps to revitalize an intra-Syrian political process to end to the war in the Arab country.

The three countries had successfully implemented a similar truce deal earlier that month following the defeat of militants in Syria’s northwestern city of Aleppo.

Syrian President Bashar al-Assad said on January 8 that he was “optimistic” about the upcoming peace negotiations in Astana, and expressed the government’s readiness to negotiate with the armed opposition groups.

Syria has been fighting foreign-sponsored militancy over the past almost six years. UN Special Envoy for Syria Staffan de Mistura estimated in August last year that more than 400,000 people had been killed in the Syrian crisis until then. The UN has stopped its official casualty count in Syria, citing its inability to verify the figures it receives from various sources.