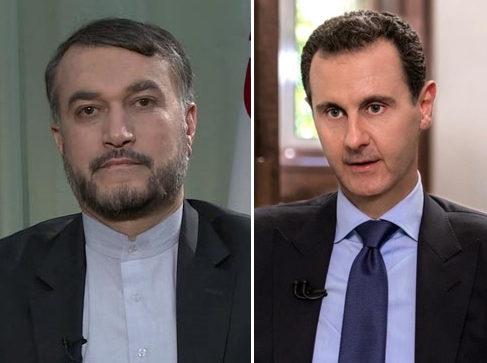 The Islamic Republic of Iran and the Russian Federation have separately rejected the reports of an agreement on removal of Syrian President Bashar al-Assad from power.

A senior foreign policy advisor to the Iranian Parliament speaker dismissed the rumours of an agreement between Iran and Russia over the resignation of the legitimate President of the Syrian Republic, saying such lies are the new tricks by the American-Zionist media.

In a tweet on Sunday, Hossein Amir-Abdollahian added that Bashar al-Assad is the legitimate president of Syria and the great leader of the fight against Takfiri terrorism in the Arab world.

“Report of a deal between Iran and Russia for his resignation is a big lie and a game by the US-Zionist media. Tehran strongly supports the sovereignty, national unity and territorial integrity of Syria,” reads his tweet.

Meanwhile, the Russian ambassador to Tehran also said Iran and Russia do not decide on the future of the Syrian people and the president of that country.

In an interview with Mehr News Agency, Levan Dzhagaryan added the future of Bashar al-Assad and Syria will be decided by the people of this country through transparent and free elections.

“We, as friendly foreign countries, must help the Syrian people to restore peace and pave the way for the continuation of the political process in this country,” underlined Dzhagaryan.

He further noted that these kinds of rumours have been spread by countries that oppose the successful function of the Astana process.

“These countries are against international law and want to forcibly overthrow the legitimate government. So, if a government is not well-matched with the United States and its allies, they will impose sanctions and try to remove that government illegally.”

In the end, Dzhagayan reiterated that Moscow has a very good relationship with Bashar al-Assad and his legitimate government, and the two countries will continue to work together.