Iranian Foreign Minister Mohammad Javad Zarif has voiced his "shock and disgust" over a Saudi Arabian airstrike on a Yemeni funeral.

“Not only Saudi Arabia, but also those who have supported the aggression by the Saudi-led coalition against Yemeni people should be held accountable for the war crimes perpetrated in Yemen over the past year and a half,” he said, as reported by Press TV.

Iran’s foreign minister also called on Ban to facilitate a proposal by the Iranian Red Crescent Society to send humanitarian aid to the Yemeni capital Sana’a.

“In view of the gravity of the situation in Yemen and the devastation caused by the attacks against the funeral hall, the Iranian Red Crescent Society is proposing to arrange for humanitarian assistance, including medical supplies, to the Yemeni people and evacuating the injured to hospitals in Iran,” he added.

Earlier, Ban called for a swift, independent probe into the airstrike, while stressing that “Those responsible for the attack must be brought to justice.”

More than 140 people were killed and over 525 wounded on Saturday, when a Saudi airstrike hit a community hall in south of the capital, where a funeral for the father of Interior Minister Jalal al-Roweishan was being held.

The death toll was one of the largest in a single incident since March 2015, when the Riyadh regime began its deadly campaign to crush the Yemeni Houthi Ansarullah movement and their allies and restore power to the resigned president, Abd Rabbuh Mansur Hadi.

Meanwhile, Iranian Foreign Ministry Spokesman also called for the establishment of a secure air corridor in a bid to send humanitarian assistance to the wounded Yemenis after Saudi Arabia’s deadly airstrikes. 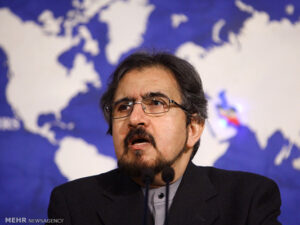 “The Islamic Republic of Iran is ready to dispatch humanitarian aid, including medical teams, medicine and food to the injured and admit the wounded people to Iran’s hospitals for treatment,” Iranian Foreign Ministry Spokesman Bahram Qassemi said on Sunday, as reported by Tasnim.

Also, Iranian Parliament Speaker Ali Larijani denounced Saturday’s carnage in the Yemeni capital of Sana’a caused by a Saudi airstrike that targeted a crowded funeral ceremony in the city.

In a message to his Yemeni counterpart Yahya Ali al-Raee on Sunday, Larijani strongly condemned the attack and expressed sympathy with the Yemeni people, officials and families of the victims.

Larijani expressed Iran’s readiness to take immediate measures to help treat those injured in the attack in coordination with the International Committee of the Red Cross and the Red Crescent Society of the Islamic Republic of Iran.

He further noted that the Saudis should halt the siege of the oppressed Yemenis so they could receive the emergency aid from Iran, IRNA reported.

The International Committee of Red Cross (ICRC) is expected to facilitate the transfer of Iran’s medical equipment to Yemen, Amir Abdollahian noted.