A look at Iranian newspaper front pages on Dec. 8

IFP has taken a look at the front pages of newspapers on Monday and picked headlines from 28 of them. IFP has simply translated the headlines and does not vouch for their accuracy.

Comments by President Rouhani at a ceremony to mark national Student Day dominated the front pages of the Iranian newspapers on Monday. In those comments the president reassured the public that he was committed to the promises he made on the campaign trail. Also splashed on the front pages of the dailies was the image of President Rouhani presenting next year’s spending package to Parliament Speaker Ali Larijani.

Abrar-e Eghtesadi: Under next year’s spending package, oil revenues will be down by $3 billion and the government will reduce the bread and energy subsidies it offers to the public. 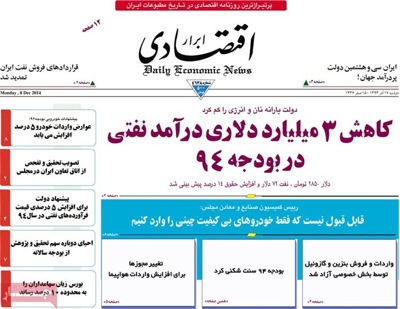 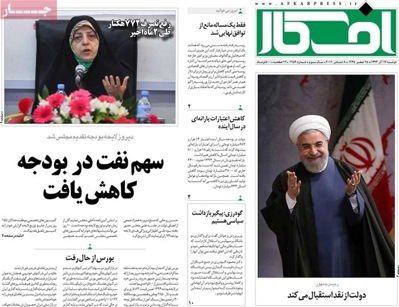 Aftab-e Yazd: “The promises I made to the people are not breakable,” said President Rouhani in a speech to mark national Student Day. 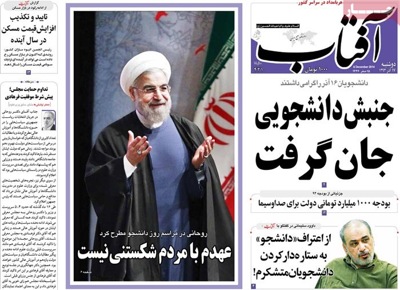 Arman-e Emrooz: “We need to promote the culture of volunteerism,” said Mahtab Keramati, a famed actress and UNICEF goodwill ambassador. 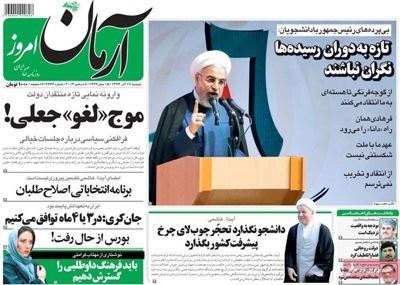 Asr-e Iranian: “We have no plans to order any bank dissolved,” said the governor of the Central Bank of Iran. [His comments came weeks after the Central Bank released the names of financial institutes, including a key private bank, operating illegally.] 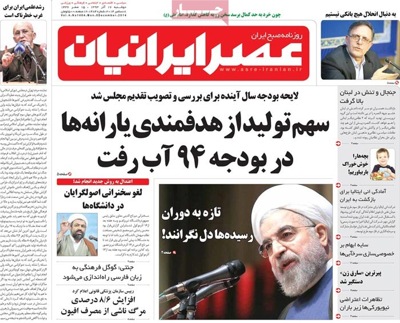 Asr-e Rasaneh: “The rise in the official rate of foreign currencies is not designed to help swell government coffers,” said the minister of economy. 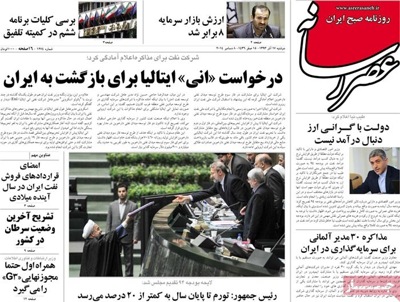 Asrar: A group of political science and law professors have praised Maj. Gen. Ghasem Soleimani, the commander of the Quds Force, an affiliate of the Islamic Revolution Guard Corps, for the role he plays in regional developments. 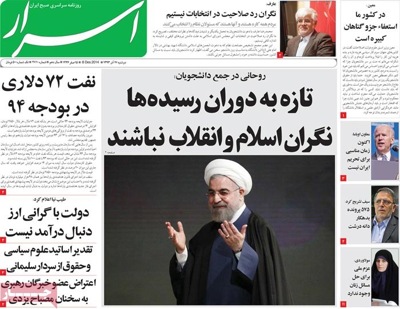 Ebtekar: “The new science minister will follow the same path, others [who failed to get confirmation from parliament] would have taken,” President Rouhani told a Student Day gathering.

Emtiaz: Italy has expressed willingness to contribute to the development of Darkhovin Oil Field. 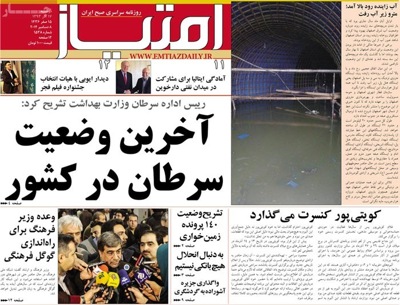 Etemad: “Reformists are to present as many as 300 candidates on their ticket for the parliamentary elections [in 2016],” said Mohammad Reza Aref, vice-president under reformist Mohammad Khatami. 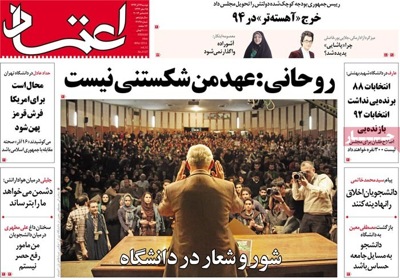 Ettela’at: “Introducing a single foreign currency rate and taming inflation are on the agenda of the Central Bank of Iran,” said the governor of the bank. 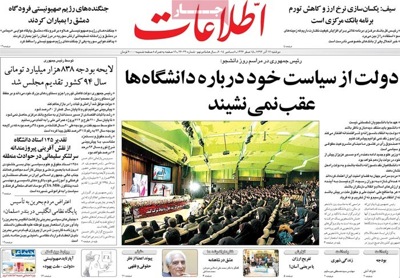 Hamshahri: Foreign ministers of Iraq and Syria are in Iran to attend a World against Violence and Extremism (WAVE) conference. 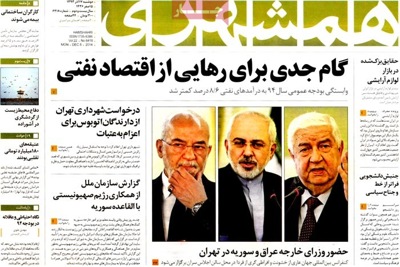 Iran: German businessmen are in Iran for the first time in 20 years. 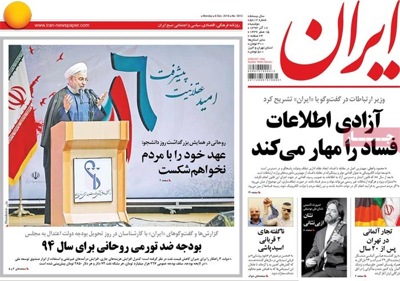 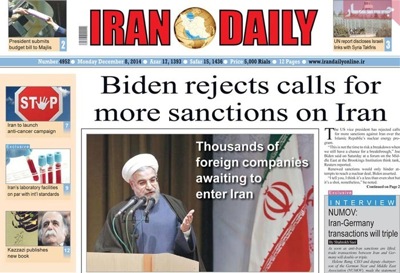 Jahan-e Sanat: Talks between Iran and Turkey to settle differences over transit of goods remained inconclusive. 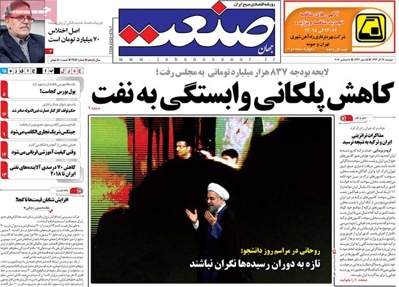 Javan: “We will never roll out the red carpet for the United States,” said Gholamali Haddad Adel, a principlist MP and a onetime speaker of the Islamic Consultative Assembly. 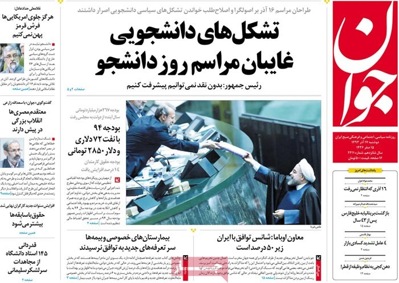 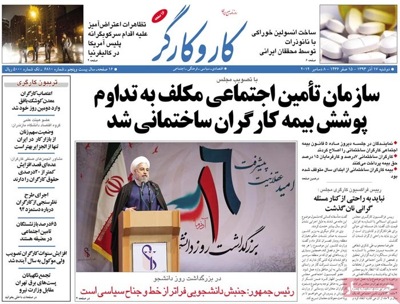 Kayhan: “Upstarts” is the new term the Government of Prudence [a reference to President Rouhani’s government] uses to describe its critics. 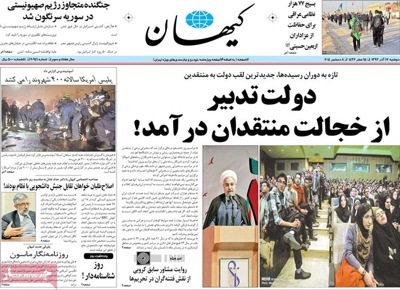 Mardomsalari: “National resolve to settle the problems women are facing is conspicuous by its absence,” said the vice-president for women and family affairs. 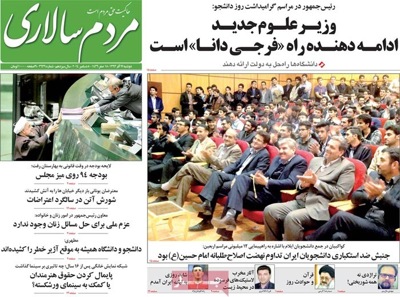 Payam-e Zaman:The ban on imports of gasoline and diesel by the private sector has been lifted. 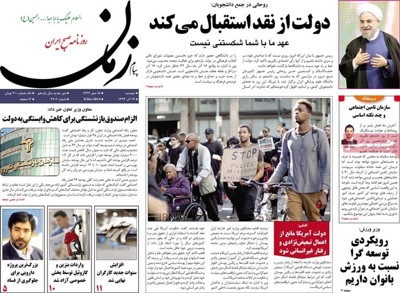 Qods: “A cultural Google will be launched [in Farsi],” said Minister of Culture and Islamic Guidance Ali Jannati. 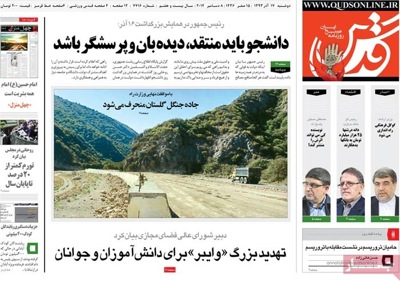 Rah-e Mardom: “Upstarts do not need to be worried about revolutionary values,” said President Hassan Rouhani.

Rah-e Mardom: The population of the disabled in Iran increases by 60,000 a year.

Resalat: “Removal of sanctions will be at the center of future talks,” said Ali Akbar Velayati, an advisor to the Supreme Leader and a former foreign minister.

Resalat: “Calling off the speeches of critics is not in line with law and the policy of moderation,” said Ahmad Tavakoli, a principlist MP. 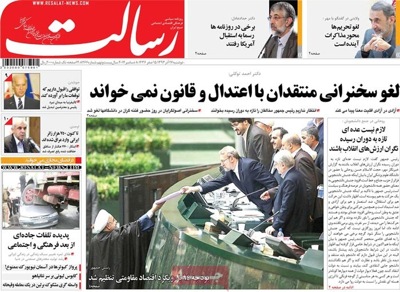 Roozan: “Application of social networks is not illegal,” said the minister of culture and Islamic guidance. 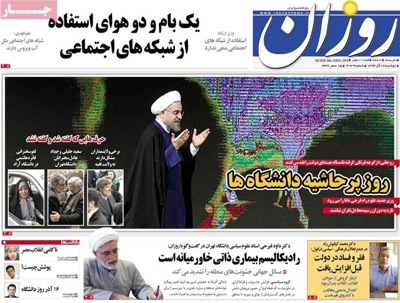 Shahrvand: Next year’s spending package [just presented to parliament by the president] shows that a third phase of the Targeted Subsidies plan won’t be implemented for now. 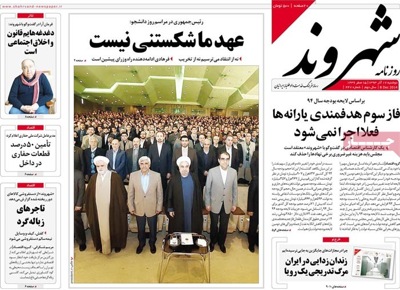 Sharq: “Some 772 hectares of protected area has been taken back from land grabbers,” said the director of the Environment Protection Organization.

Sharq: The country’s operating budget will rely on tax revenues by as much as 50 percent next year. 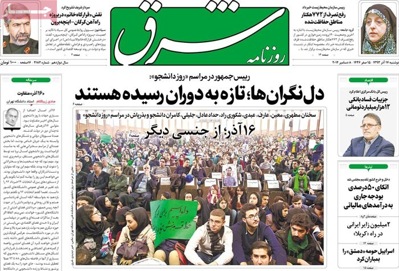 Taadol: “A special court is to be set up to hear cases involving banking fraud,” said the governor of the Central Bank. 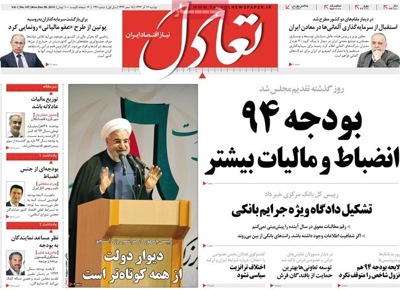 Tafahom: Turning Iran’s only island in the Caspian Sea into a tourist spot will create 10,000 jobs. But it is not worth the damage the move will cause to the environment. 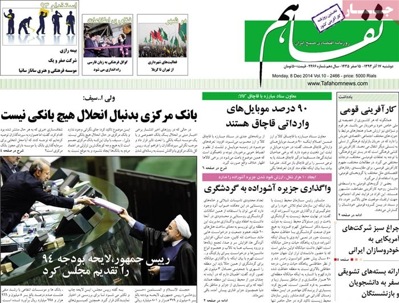