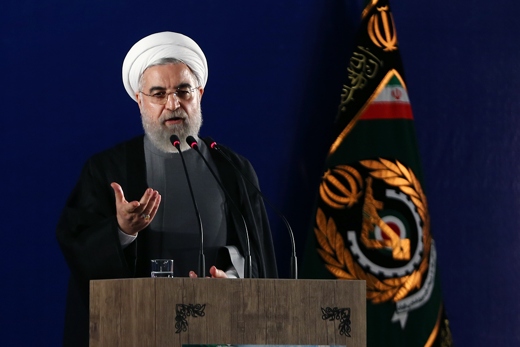 Iranian President Hassan Rouhani says the Islamic Republic must enhance its defense power, stressing that Iran has no intention of invading any country.

“We should strengthen our defense capability, so that the [nuclear] agreement [reached with the P5+1 group] and stability will remain sustainable in this country and our cordial ties with the region and the world will remain amicable and lasting,” Rouhani said during a ceremony in Tehran on Saturday marking National Defense Industry Day.

He added that Iran’s defense industries are there to defend the country’s territory, interests and people, saying Tehran has never sought to launch aggression against other countries.

Iran pursues a deterrent and defensive strategy and its policy is based on détente, convergence and confidence-building with other countries, he said.

He added that such a policy does not contradict Iran’s “defense power and military industry.”

Deterrent power cannot be achieved only through defense and military industries, Rouhani said, adding the country needs cultural, scientific, political and economic might as well to realize national strength.

Rouhani further said Iran’s power would ensure regional stability and expressed the country’s readiness to form a coalition with countries in the region, which share common goals with Iran, to fight terrorism.

He reaffirmed Iran’s determination to enhance its military power and defend national territory and interests.

In the presence of President Rouhani, Iran unveiled on Saturday a new solid-fuel precision-guided missile, named Fateh 313, which has been designed and manufactured by experts at the Defense Ministry’s Aerospace Industries Organization.

Fateh 313, with a range of 500 kilometers, is an advanced generation of missiles which runs on combined solid fuel using a domestically-designed sensor.