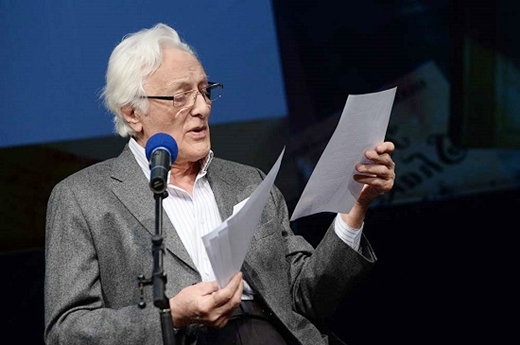 Several Iranian thespians, stage artists, and literati attended a ceremony held on Saturday night in Tehran to commemorate the 400th anniversary of the death of the British dramatist William Shakespeare.

At the beginning of the ceremony, which was hosted by Ardeshir Salehpour, Iranian theatre actor and director Mikaeil Shahrestani performed parts of Shakespeare’s Hamlet, one of the world’s most famous tragedies.

Qotbeddin Sadeqi, an Iranian theatre director and researcher, also delivered a speech, during which he described the playwright and poet as an exceptional personality who emerged in a time when Britain’s art and economy were thriving.

On the reason why Shakespeare is an inspirational figure for the world’s theatre, Sadeqi said, “If we look at his works, we will see four types of plays: comedies, historical plays, Roman plays, and tragedies.”

“The playwright taught us three lessons,” he noted. “The first was his special view of religion, which has its roots in the Baroque worldview. The second point, derived from his historical works, is that power is faithless and does not last forever,” with the third point being Shakespeare’s deep scepticism towards tradition and love, seen in his tragedies. Such scepticism originated from the fact that human perception of such concepts is nothing but an illusion, he added. “This tragic view is extrapolated to the extreme, leading to failure and death.”

“In his tragedies, everyone learns something: King Lear learns, Macbeth understands, and so on. How can these lessons be effective? I learned from Shakespeare that one can stand against the world’s conflicts through theatre,” the Iranian director said.

Elsewhere in the ceremony, Manouchehr Anvar, another Iranian director and playwright who is a graduate of Britain’s Royal Academy of Arts, recited parts of Hamlet in English.

A statement by Shakespeare’s Globe Theatre was also read out in the ceremony. In the statement, the group referred to its performances of Hamlet in 197 countries, including a recent performance in Tehran.

“Our performance in Tehran taught us that theatre can be a place to understand sincerity, sympathy, and a position beyond the limitations of languages,” the statement read.

“For centuries, Shakespeare’s plays have been inspiring different directors throughout the world, and Iran, with its old and brilliant history of theatre, and given the Iranian works performed in different parts of the world in recent years, is now considered part of the global theatre calendar,” the statement added.

It also noted that it is not surprising that Shakespeare’s works enjoy a great position in Iran and inspire various generations of Iranian artists.

At the end of the ceremony, a portrait of Shakespeare was unveiled and signed by Iranian artists.