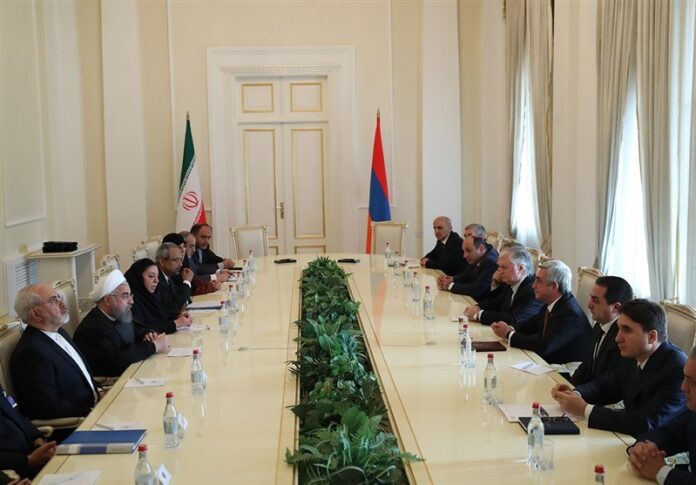 Iran’s president expressed the country’s willingness to promote cooperation with neighboring Armenia in the energy industry.

Speaking at a joint meeting of Iran-Armenia high-ranking delegations in Yerevan on Wednesday, President Hassan Rouhani called for closer energy ties between the two sides, such as by boosting gas exports to Armenia and construction of the third power supply line between the two countries.

Highlighting the suitable grounds for cooperation in the transportation industry, Rouhani said railroad links between Iran and Armenia would connect the Persian Gulf to the Black Sea and benefit the whole region.

He also said expansion of bilateral economic ties and cooperation in the engineering and technical fields require easier banking interaction.

President Rouhani further called for settlement of a conflict between Armenia and the Republic of Azerbaijan over Nagorno-Karabakh region with “goodwill” and through “negotiations and a win-win approach”, and highlighted the necessity of cooperation between Tehran and Yerevan in the fight against terrorism.

Armenia’s president also made comments at the meeting, saying his country sees no obstacle to the expansion of ties with Iran.

Serzh Sargsian said Yerevan is willing to boost cooperation with Tehran in the energy industry, transportation and banking interaction.

After the meeting, officials from the two sides signed five documents, including an agreement on using a joint border crossing linking Iran’s Norduz to Armenia’s Meghri.

Heading a delegation, Iranian President Hassan Rouhani began a tour of regional countries on Wednesday morning. He is scheduled to visit Kazakhstan and Kyrgyzstan after Armenia.