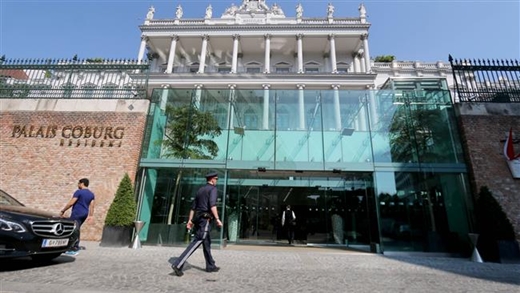 The Iranian embassies in Austria and Switzerland have voiced concern about recent media reports that Israel has spied on the venues of nuclear talks in the two European countries.

The Iranian embassies in Austria and Switzerland have expressed concern about recent media reports that the venues of the talks between Iran and P5+1 in the two European countries have been spied on.

In separate official written messages to the foreign ministries of Austria and Switzerland, Iranian diplomatic missions in Vienna and Bern notified the two European countries of Iran’s serious concern over the security of the locations that host the negotiations between Iran and the six countries of P5+1.

The Iranian embassies demanded that any information found in an investigation of the issue be shared with the Islamic Republic.

The Austrian Foreign Ministry was asked in particular to take whatever measures necessary to provide security, including cyber-security, for the venue of the talks.

Vienna is currently hosting the latest round of the nuclear negotiations between Iran and the six other states – Russia, China, France, Britain, the US and Germany.

On Thursday, Swiss and Austrian officials said they have begun investigating reports that a computer virus linked to Israel targeted the hotels used by the delegates from Iran and P5+1.

The Wall Street Journal (WSJ) reported on Wednesday that spyware, widely believed to be used by Israeli spies, had attacked the computer systems of the hotels hosting the sensitive negotiations.

Experts at Russia-based Cybersecurity Company Kaspersky were quoted by the Journal as saying that the firm had found at the sites traces of malware believed to be used by Israel. The company dubbed it Duqu Bet, and said it was an “improved version” of the Duqu virus, which has previously been used by the Israeli regime.

On Thursday, a source with the Iranian nuclear negotiating team said the negotiators had already been taking into consideration “the high risk and possibility of eavesdropping and are always cautious” regardless of the recent espionage reports.

Negotiators from Iran and P5+1 have held talks at Swiss hotels of Beau-Rivage Palace, Royal Plaza Montreux, Intercontinental and Hotel President Wilson as well as Palais Coburg in Vienna.

The two sides are working to reach a comprehensive nuclear accord by the end of June.

The diplomatic efforts to resolve the Iranian nuclear issue has sharply irked Israel, with the regime’s officials being engaged in heavy lobbying to thwart a final accord between Iran and its negotiating partners.