Iran exported $60 million worth of carpets in 4 months 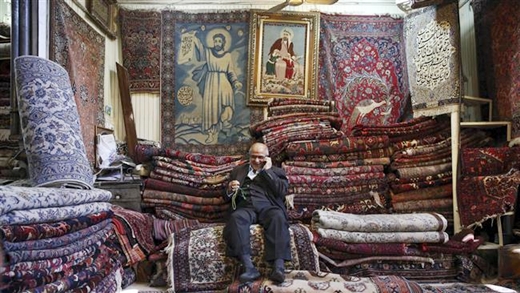 The Iranian hand-woven carpets have been exported to 80 countries, said the head of the National Carpet Center.

Head of Iran’s National Carpet Center says the Islamic Republic has exported $60 million worth of hand-woven carpets during the first four months of the current Iranian calendar year (started March 21).

Speaking to reporters in Tehran on Sunday, Hamid Kargar noted that the Iranian hand-woven carpets have been exported to 80 countries during the period.

He added, “In the past three years, Iran faced major problems for exports of hand-woven carpets, but the process has been reversed” since the beginning of last Iranian year (March 21, 2014), and carpet exports have slowly but gradually increased.

The official said about $330 million worth of hand-woven carpets, weighing 5,100 tons, were exported last year, showing an increase of about 2.7 percent compared to the year before it.

Kargar stated that Iran will hold its 24th exhibition of hand-woven carpets on August 23-29, adding that 71 foreign merchants, including 54 foreign nationals and 17 Iranian businesspeople living abroad, will take part in this year’s exhibition, which will be held over a total area of 30,000 square meters.

He noted that businesspeople from many countries, including Japan, Azerbaijan, Pakistan, the United Arab Emirates, India, Denmark, Russia and the United States will take part in Iran’s 24th hand-woven carpet exhibition.

Last Tuesday, the Boston Globe published a report, saying that Iran’s hand-woven carpets will once again conquer US markets after sanctions imposed on the Islamic Republic over its nuclear program are lifted.

It added that “Iran’s famed carpet weavers” are “anticipating a boost in [Iran’s carpet] exports as sanctions” will be soon lifted in line with an agreement reached between Tehran and six world powers in mid-July.

On July 14, Iran and P5+1– the US, the UK, Germany, France, China, and Russia – reached the conclusion of negotiations over Tehran’s civilian nuclear program, with the Islamic Republic and the sextet sealing an agreement, known as the Joint Comprehensive Plan of Action (JCPOA).

Based on JCPOA, the sextet agreed to remove all sanctions imposed on Iran’s economic and energy sectors in return for certain restrictions in Iran’s nuclear program.

The paper quoted Kargar as saying that before sanctions, Iran’s hand-woven carpets accounted for about one-fifth of the US carpet market, adding that Iran’s carpet producers are already making carpets for the US market, hoping that exports will resume next year.

“People in the carpet business have begun to produce carpets suiting the taste of the American market, receiving orders and negotiating with customers,” he added.