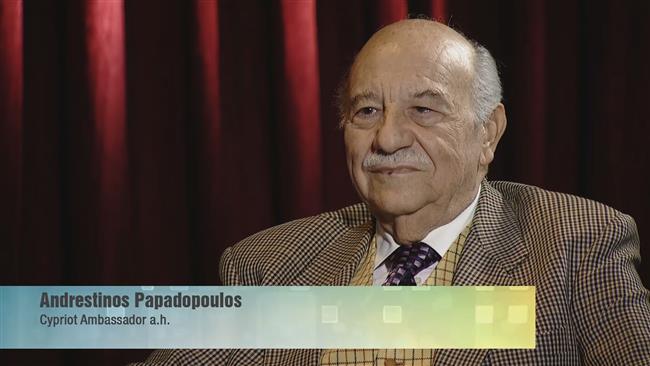 Pres TV has interviewed Andrestinos Papadopoulos, a former Cypriot ambassador to Yugoslavia, Algeria and former Czech Slovakia, during his visit to Tehran to discuss the Iran nuclear agreement and Tehran-Nicosia relations.

Papadopoulos, who is currently on a trip to Iran, cites his love for the nation and the historic attraction of the Persian culture for Greeks — which they “respect” and “feel close to” — as the main reasons for accepting the Iranian government’s invitation for a visit.

The Cypriot diplomat, who is also an academic expert on international law, describes the recent nuclear agreement between Iran and the P5+1 group of countries, which went into effect last month, as a “win-win situation,” arguing that the deal would have been non-existent if it had not fulfilled the demands of both sides.

“I believe this deal is really a landmark in history” and will benefit both sides, he says.

He further explains that the deal blocks any attempt to tarnish Iran’s image and “demonize” it and encourages foreign investment in the country and boosts its oil sales.

“Economically strong, Iran will also be politically strong,” he adds. “We know very well that Iran is one of the major players in the region of the Middle East.”

The deal would also strengthen Iran’s standing in Syria, Iraq and Yemen, which are now faced with the danger of Takfiri terrorism, he adds.

The “amelioration” of ties with Arab countries is another advantage that Papadopoulos thinks the deal would ensue for Iran.

Referring to Leader of the Islamic Revolution Ayatollah Seyyed Ali Khamenei’s letters to the youths in West, the diplomat says that the nuclear deal would also boost Iran’s position in the face of Takfiri terror groups such as Daesh (ISIL), proving the Ayatollah Khamenei’s point that such groups do not represent true Islam.

The West would also sow economic benefits from the deal by accessing Iranian oil industry and products at a lower cost, while enjoying “a bigger part of the cake,” he says.

On Iran-Cyprus relations, Papadopoulos points to Cypriot Foreign Minister Ioannis Kasoulides’s visit to Tehran in January, and trips by various Iranian delegates to the European country as a sign that Iran and Cyprus can work to promote their economic ties to their mutual benefit.