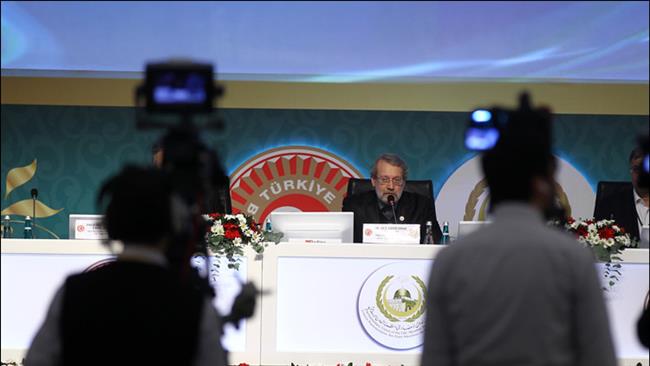 The Iranian parliament (Majlis) speaker says those insulting the holy Prophet of Islam are playing with fire, as Muslims will surely react to any irreverence to their most respected figure.

“Ridiculing a great personality whom the Holy Quran describes as a blessing to the world is playing with fire,” Larijani said on Wednesday, addressing the opening ceremony of the 10th session of the Parliamentary Union of the Organization of Islamic Cooperation (PUOIC) in Turkey.

Larijani was alluding to the publication of blasphemous cartoons by the French satirical magazine, Charlie Hebdo, which was swiftly condemned by Muslims across the world as a clear insult to Islam’s most revered figure.

The high-ranking Iranian official warned Westerners that Prophet Muhammad is regarded as a “red line” for all Muslims.

Larijani further criticized the release of sacrilegious cartoons, saying that Muslims will stand up against such plots.

“Those that are committing such wicked acts, which are manifestations of modern savagery, must know that no Muslim can ever tolerate such a shame,” he said.

He added that the ultimate goal of the Muslims across the world is to seek democracy, gain independence and to revive the Islamic identity.

Protests against the release of cartoons in many Muslim states have mostly turned violent, with many protesters calling for the immediate expulsion of France’s diplomatic staff from their countries. The protesters also want the French government to abandon its policy of defending such sacrilegious moves under the pretext of defending the freedom of expression.