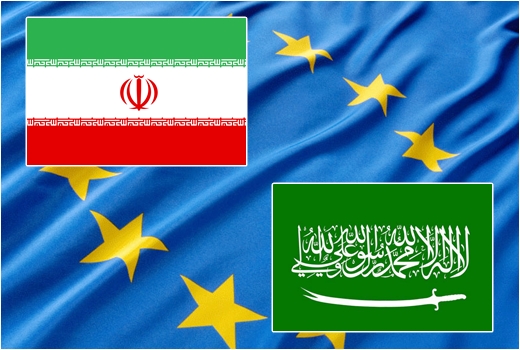 Mehdi Zakerian, an Iranian academic, believes that Iran’s improved ties with the European Union can have an impact on the country’s ties with other regional states, particularly Saudi Arabia.

Iran’s ties with the European Union have always been influenced by the political and social developments both in Iran and other Middle Eastern countries. The EU attaches a great importance to Iran, given the country’s influence in the region, its numerous and diverse resources, energy reserves, and lucrative market for European goods.

Issues such as human rights and Tehran’s nuclear energy program have been among the controversial issues raised between the two sides in recent years. During the nuclear negotiations between Tehran and world powers, the EU representative tried to facilitate the achievement of a lasting nuclear deal by bringing the old enemies, Iran and the US, closer to each other.

The EU also took the first step and proposed a resolution to the Board of Governors of the International Atomic Energy Agency (IAEA), which was finally approved by the members and prepared the grounds for the operational phase of the nuclear deal (JCPOA).

After the JCPOA, the EU is trying to rebuild its political and trade ties with Iran. The practical measures the European body has put on its agenda in the post-JCPOA era include: terminating the sanctions it had unilaterally imposed on Iran during the nuclear tension, helping Iran with its accession to the World Trade Organization (WTO), and opening the EU office in Tehran.

During the forty years since Iran’s 1979 Revolution, the ties between Iran and Europe have had lots of ups and downs. Arman daily newspaper discusses these ties and their influence on Iran’s regional relations in an interview with Mehdi Zakerian, a university professor and political analyst.

Here is IFP’s translation of selected parts of the interview.

Given the importance of the European Union as a regional body, what position does it have in Iran’s foreign policy?

The European Union is considered a regional-international body. … The Union was originally founded for economic reasons, so the EU has great economic importance.

However, the body has gradually turned to an international and multifaceted one with different political, economic, cultural, social, and legal aspects. We can dare to say after the United Nations, the EU is the most important body in terms of playing a role in and commenting on the resolution of international crises. …

The EU is the most widespread regional organization of Europe, and given its importance in the international system, it naturally can be influential and significant for many countries. The body can thus be of a great importance to Iran as a key player in the Middle East. …

I believe that they can be effective. An extremist and radical faction is in power in Saudi Arabia. There are wise people in the country as well. Therefore, the more that Iran can expand its relations and interactions throughout the world, the more influence it can have on our country’s ties with third-party countries including Turkey, Pakistan and Saudi Arabia. …

The EU is an important regional body, and the way Iran interacts with it can motivate Saudi Arabia. On the other hand, under such circumstances, the EU might ask and put pressure on other countries, including Saudi Arabia, to maintain good regional ties with Iran.

Some analysts believe that Iran should start talks with a number of new countries in a bid to decrease Saudi Arabia’s destructive policies. Do you think such policies can have positive outcomes?

In defining its foreign policy and relations with other countries and organizations, Iran should see beyond the ongoing crises or [temporary] conflicts of opinion with certain states. It should not boost its ties with the EU, Russia, and the US only because it has problems with a country or a group of countries. Rather, it should see how Iran’s interests and demands are defined in the world, and which international players can meet them. We should start our talks and have good ties with different countries based on such an attitude.

… It is totally wrong to enhance our ties with the EU solely due to certain current problems with Saudi Arabia. Traditionally, this type of attitude has been in place at certain junctures in Iran’s foreign policy history.

Has Iran’s foreign ministry managed to have a constructive policy on the nuclear deal?

… One should have specific strategies and plans for doing different things. Under the former Iranian President Mahmoud Ahmadinejad, we were faced with populist, slogan-based foreign policy. Their diplomacy was not at all based on knowledge and expertise. However, the incumbent government of President Hassan Rouhani has fortunately moved towards a knowledge-based foreign policy. The reason is the expertise of Foreign Minister Mohammad Javad Zarif and his advisors.

Zarif has set good patterns for the country’s managers. He said we should consider the Establishment’s agenda in dealing with the nuclear issue: we should see what we want from our nuclear program. We should achieve whatever helps the country’s peaceful nuclear activities, while abandoning whatever had led to the imposition of anti-Iran sanctions.

In other words, sanctions are out and peaceful nuclear activities are in. Having such a definition in mind, they started their negotiations with the Group 5+1 (Russia, China, the US, Britain, France, and Germany) under the EU’s leadership, and we managed to achieve positive and brilliant outcomes on our nuclear program.

Now, after such a successful model and experience, the foreign ministry should be permitted to work on other issues, including the definition of economic and political relations. Of course, this hinges on a categorization in which the EU is considered a top economic priority. … Iran, however, can have cooperation with the European bloc in various fields, because there are lots of common interests between the two sides. …

In which fields can Iran start its interactions with the EU?

The EU is not just economically important. Rather, Iran should consider political, cultural, and legal areas. … Currently, the continent’s economy is attractive for Iran.

What impact can the visits of European delegations to Iran have on the country’s economy?

The presence of European delegations has a lot of positive and effective outcomes for Iran, but our eyes should be kept wide open, so that we can make the best use of these chances and achieve as much as possible.

A question might be asked as to what Iran earns from such reciprocal visits. The answer is that such visits are great motivations for the expansion of economic ties between Iran and the EU member states.  However, the country’s businessmen, traders, industrialists, and experts in economy and industry should pay attention to the contract types. In the past, even during the reformist President Mohammad Khatami’s tenure, which was a very successful era, certain contracts were legally ill-prepared. … Therefore, the way the contract is prepared and the negotiations are held is very important.

Can the recent terrorist attacks in Europe have any impact on European states’ attitudes towards Saudi Arabia as the main state-sponsor of terrorism?

Two lobbies are active in major EU countries including Germany, Britain, Italy, and France. One of them is the Saudi lobby, in which Qatar, the UAE, and Saudis pay huge amounts of money to present Iran as a danger to the international community. … They claim these countries are opponents of terrorism and control such groups. … On the other hand, there is an intellectual movement in Europe, whose members believe that terrorism and violence have their roots in the Wahhabi school of thought. They believe those who develop such thoughts should be countered; therefore, they conclude that Saudi Arabia, the UAE, and Qatar are on the same boat as the Wahhabi and Salafi movements.

These countries are thus believed to be sources of danger for global peace and security. Proponents of the second European intellectual movement believe that having extensive relations [with Riyadh] is not in the interest of Europe. The movement, however, does not have huge financial resources and is considered a minority working independently in Europe. …

When the terrorist attacks occurred in Europe, the second movement attracted some attention, but … such incidents cannot weaken the Arab lobby. That would need more extensive and effective measures.

How is it possible to minimise the role and influence of anti-Iran lobby groups in Europe?

Iran, and similar countries, should look for a series of dialogue-based meetings. If such meetings are held between Iran and the EU, the money-based lobbies will definitely lose their influence in Europe, and the second movement can play a role in a revision of the EU’s ties with these Arab states.