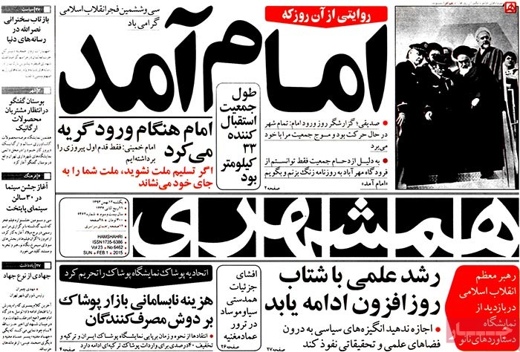 Fereydoon Sedighi, a veteran journalist, takes us back in time to the day the late Imam Khomeini made a historic return to his homeland.

Hamshahri daily on February 1 published an interview with a veteran journalist and professor of journalism, Fereydoon Sedighi, who used to be a Kayhan reporter 36 years ago when the late Imam Khomeini returned home from exile to topple the unpopular regime of the Shah.

Sedighi says the headline “The Imam Returned Home” [a famous banner headline of the Kayhan daily in February 1979] was somehow chosen by Imam Khomeini himself, [implying that Imam’s arrival home against all odds prompted journalists to pick the famous headline].

The following is the translation of the full interview with the veteran journalist and a witness to Imam’s homecoming:

Why were you picked to cover the home return of the [late] Imam for Kayhan daily?

There were three of us who were assigned to go to the airport that day [February 1, 1979]. We had already been selected. The late Hossein Partovi was the photojournalist who shot the famous photo featuring Imam in a meeting with a number of Homafars [an officer rank in the Iranian Air Force and Iran’s Army Aviation from 1968 to 1988].

The atmosphere was so heavy that Mr. Partovi went to hiding for 48 hours for the photo he had taken from Imam. He didn’t want to be arrested. Another group led by Mr. Mehdi Forghani had been based in Behesht-e Zahra Cemetery. They covered the speech Imam delivered in the cemetery of which the headline “I slap this government in the face” was highlighted.

At what time did you get to the airport?

We went there in the wee hours of the morning. Coordination work had been done with the daily’s senior staff beforehand. The airport had asked for the list [of reporters] and reporters could only enter the airport with pre-planned coordination. A special place had been dedicated to reporters. Back then the communications devices were not as common as today; there was no mobile phone and no easy access to communication devices. It was not at all like what we have today.

Do you remember how you relayed the news of Imam’s arrival to Kayhan in that atmosphere?

We had gone to the airport early in the morning. A site at the heart of the side corridor had been designated for the telephone contacts of reporters. The hall Imam was planned to enter through was flanked by the representatives of different [political] parties and groups carrying placards.

The Freedom Movement of Iran, the National Front, different organizations as well as students and teachers’ institutions had all sent their envoys to the ceremony. They all thought that Imam would enter the hallway, pay an inspection tour, and leave the scene heading for the intended destination.

Reporters and photographers had been stationed in the airport’s upper mezzanine overlooking the runway. The place was teeming with reporters from different media circles and broadcasters. A group of youth was waiting at a lower level of the building. One hour later we learned that they were members of the chorus which was to perform the famous Khomeini O Imam (Khomeini Ey Imam) song.

When Imam entered the place, the crowd mobbed him and everything was out of control. As a result, the meeting with the representatives of different groups – which were waiting for Imam’s arrival in an orderly manner – did not happen. In the meantime, the chorus began to sing the song. I heard it there for the first time.

Where was this group affiliated to?

I think the committee in charge of welcoming Imam had made preparations for this group.

When exactly did you make the first contact with the daily?

In that massive, packed crowd, the first contact with the daily was established when the plane [carrying Imam] touched down. I sent the report to the newspaper via an airport phone, saying for instance: ‘It is 9:27 a.m. Imam has come [home] and Air Force officers (Homafars) are at the airport. The photographers are standing on the airstair.’ I could only find an opportunity to relay the report that Imam returned home and it turned into a banner headline.

How many times did Kayhan go to reprint that day, February 1, 1979?

I heard five times. Back then only four cover pages of Kayhan used to be reprinted. “The Imam has returned home” was a Kayhan headline that day. Another was “I slap this government in the face”. The day Imam returned home, Kayhan’s print run exceeded one million. It was an unprecedented, strange and unrepeatable event in the history of the Iranian media before and even after the revolution.

Could you go back to the daily’s office that day?

It was all but impossible to return. A raging sea of people was in the city. As a reporter, I was to follow the car carrying Imam to pursue the rest of the unfolding news. But it was virtually impossible for me who was a thin, frail young man. The entire city was on the move. For a while I ran after the car, but I came to realize that I was being crushed. I melted into the crowd.