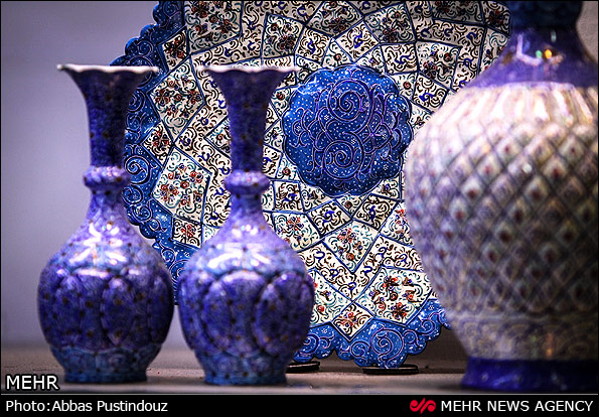 A handicraft as old as 5 millenniums, enamel has still remained popular and magnificent. Being called Meenakari in Iran, the art's hub in the country is Isfahan.

Enamel, a material ancient Persians used to color and decorate the surface of metals, dates back almost 5,000 years.

The craft which involves the fusion of powdered glass to a substrate is said to be invented by Iranian craftsmen.  Persian enamelled plates dating back Sassanid era are among famous examples of this ancient handicraft in Iran. Enamelwork was later taken from Iran to other countries by Mongols.

Although enamelwork is often just done on copper today, it can be applied to other metals such as gold and silver, too. Since gold is the only metal not oxidized after the melting of enamel, the enamelwork on gold has far better quality than the one done on silver or copper.

Currently, Isfahan is the hub of enamel in Iran. Great masters live there and make  magnificent products.

The follows are Mehr News Agency‘s photos of enamel masterpieces in Isfahan: