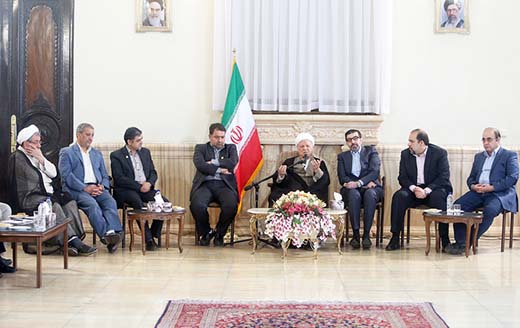 The chairman of the Expediency Council has said that the late Imam, the Supreme Leader and all those who care for the revolution have drawn on Islamic principles to highlight the role people play in elections.

The chairman of the Expediency Council has said that Ijtihad is the principlist reformism which requires adherence to principles and modification in step with the requirements of the times.

Ayatollah Akbar Hashemi Rafsanjani made the comment on Sunday and added that reformists and principlists are simply two titles and the followers of reformism and principlism should only have differences over tactics not tenets. The following is the translation of part of the remarks of the top councilor as reported by the Iranian Students’ News Agency (ISNA) on August 30:

It is natural for reformists and principlists to be at odds over methods of administering affairs in the country, but unfortunately some have taken their differences to the level of principles and talk out of grudge. Orthodox principlists are reformist [in nature] and truth-seeking reformists are principlist.

Islam has put forward the idea of Ijtihad [the independent or original interpretation of the problems which are not precisely covered by the holy Koran, Hadith or scholarly consensus] which urges people to maintain the principles and help take society toward better conditions. This is principlist reformism.

Society’s culture can undergo transformation if people and officials steer clear of ethical vice such as insult, slander and backbiting. If we keep our distance from such demerits, the Islamic Revolution can turn into a model for the oppressed nations.

Iran’s revolution is unique in the history of Islam and in the contemporary world. Those people who honestly took up the fight [against colonialism] and backed the [late] Imam and his fellow clerics and put their lives on the line will not let outside enemies hijack the ideals of Imam and the martyrs. […]

[Supreme Leader] Ayatollah Khamenei was one of the closest figures to Imam. He is a real, devout revolutionary who remains committed to his allegiance to Imam and the martyrs.

There are some who think people’s votes are simply for decorative purposes. They want to create a gap between people and the pillars of the revolution. Imam, the Supreme Leader and all those who care for the revolution have always highlighted the role people’s votes play, something that stems from Islamic principles.

One way to run the country is to give the public a say in the administration of affairs, and that can be institutionalized through boosting parties in the country. Different parties should be established so that we can promote the culture of a multi-party system. What matters is how we walk down the path of revolution and how we safeguard its achievements; the names [we choose for these parties] are of secondary importance.

It is an unforgivable sin to dissuade revolutionaries at a time when the friends and foes are watching Iran to see how the Islamic Republic will act on the world stage and how it will influence regional countries. Fuelling differences is a big sin at this juncture. […]

[…] Extremist terrorists – the third side of the triangle of despotism and colonialism – targeted people’s economic, political and social security [in Egypt]. Lack of experience on the part of the so-called Islamic groups hurt people and made them vote for military men and the remnants of the previous government.

The absence of vigilant leadership, people’s failure to get involved in the country’s affairs and fanning the flames of tensions are the three reasons why these revolutions failed to achieve their ideals and objectives. […]

Terrorists who build on their global communications have benefited from occupying parts of Islamic countries, especially Iraq and Syria. If these radical groups are not countered, radicalism is likely to take advantage of popular dissatisfaction in different countries and spill over into others. […]