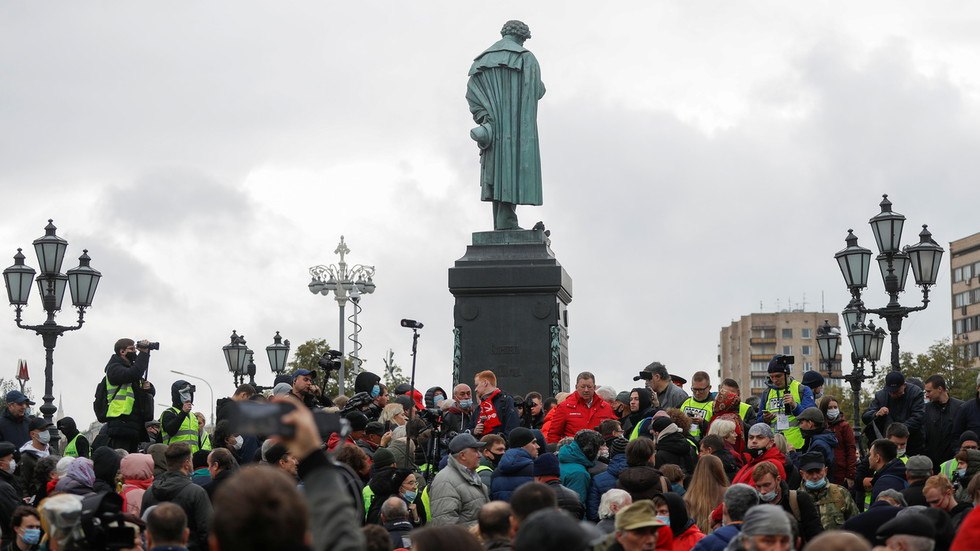 Hundreds of Russians turned out in the capital city of Moscow on Saturday to protest the outcome of the recent parliamentary election.

Some 400 people showed up for an unauthorized demonstration staged by Russia’s Communist Party. The communists have rejected the outcome of the parliamentary elections, blaming their poor performance in the city on alleged fraud.

The communists gathered in Pushkin Square to protest about the results that their party, the KPRF, garnered in last weekend’s elections. Since the demo was not authorized by the authorities, in line with coronavirus restrictions, the organizers insisted the gathering was not a proper rally, but instead merely a “meeting with MPs”.

Some 400 KPRF supporters showed up for the event, Moscow police told TASS. Some Russian news outlets have provided higher estimates, however, reporting some 1,000 people as being in attendance.

The protesters were met with a moderate police presence, the officers repeatedly urging the communists to disperse. A small group of counter-protesters, chanting anti-communist and pro-authorities slogans was also present. The latter engaged in minor scuffles with the communists, but no one ended up being detained.

While the KPRF saw a 6% gain overall and secured 15 new seats in parliament, it suffered a series of defeats in Moscow despite its candidates taking the initial lead. Several of them lost the vote after ballots cast online were counted. That unexpected twist prompted the party to reject the results of the voting in the capital, and to claim it had fallen victim to alleged election fraud.

However, after the opposition requested a recount of electronic votes in Moscow, the Election Monitoring Public Committee failed to find any foul play. The committee’s head, prominent journalist Alexey Venediktov, who leads the liberal radio station Ekho Moskvy, repeatedly said that the IT team analyzing the results had found no evidence of tampering, and that each individual vote could be traced back and verified, thanks to the system being based on blockchain technology.