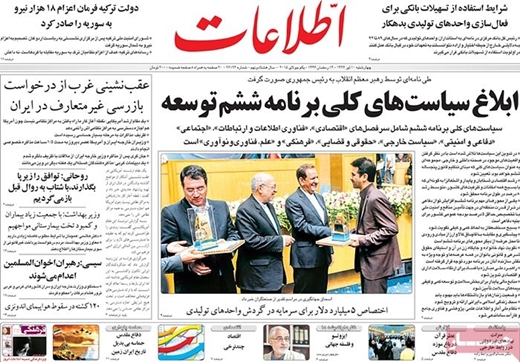 A special look at the headlines Ettela’at newspaper covered on July 1.

♦ The Supreme Leader has communicated the macro-policies of the Sixth Development Plan to the president.

♦ Production units are to receive some $5 billion for their working capital.

First Vice-President Eshagh Jahangiri made the announcement at a ceremony to praise the services of industrialists.

The governor of the Central Bank of Iran has sent letters to provincial governors telling them that those units which have been unable to pay back their debts between 2010 and 2013 for reasons beyond their control should be given priority in getting loans.

♦ The Turkish government has ordered 18,000 troops deployed to Syria.

The troops are to take on Kurdish fighters, not IS, Turkish media have reported.

♦ The West has withdrawn its unconventional demand for access to military sites.

The foreign ministers of Iran and the US had a one-on-one meeting which lasted 90 minutes in Vienna on Tuesday.

♦ “If they [world powers] fail to keep their end of the bargain, we would rush back to the previous path,” said President Rouhani.

♦ “We are facing a shortage of hospital beds and a large patient population to deal with,” said Health Minister Hassan Hashemi.

The health chief further said that the healthcare system is far away from ideal conditions.

His comments came as the Iranian Foreign Ministry spokeswoman and leaders of Western and Arab countries condemned the assassination of Egypt’s top public prosecutor in a bomb attack in Cairo.

♦ Up to 120 people were killed when an Indonesian [military transport] plane went down.