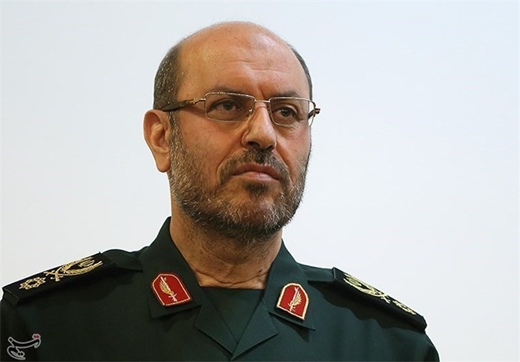 Iran’s Defense Minister Brigadier General Hossein Dehqan said the blood of Mustafa Badreddine, senior Hezbollah commander who was martyred in Damascus on Thursday, and other martyrs of the resistance movement will definitely help to uproot terrorism in the region.

In a message to Hezbollah Secretary General Seyed Hassan Nasrallah on Saturday, Dehqan offered condolences to Hezbollah and the bereaved family of Badreddine, and said, “Undoubtedly, the blood of Mustafa Badreddine and other martyrs of teh resistance movement shed in the battle against the Zionist (Israeli) regime and Daesh (also known as ISIL and ISIS) mercenaries will root out terrorism in the region.”

Referring to attempts by major supporters of the Daesh Takfiri terrorist group, including the US, Israel and certain ‘treacherous’ regional regimes, to prevent the defeat of terrorism, the Defense Minister underlined that Daesh is, notwithstanding, nearing its end due to the sacrifices and steadfastness of the resistance front.

Mustafa Badreddine was martyred in a massive explosion near Damascus International Airport on Friday, in an attack Hezbollah later said had been carried out by “Takfiri groups”.

He was the commander of Hezbollah’s military arm, its chief of intelligence, and adviser to Nasrallah.

Badreddine was also the cousin and brother-in-law of the top Hezbollah commander, Imad Mughniyeh, who was likewise assassinated by the Israeli regime in Damascus in 2008.