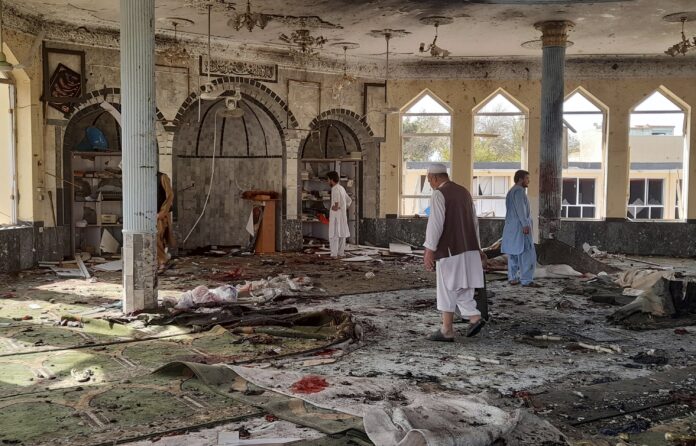 The leader of Lebanon’s Hezbollah says the Daesh terror outfit aims to stoke tensions and plunge Afghanistan into a civil war. The comment comes days after dozens were killed and wounded in a Daesh-claimed attack on a mosque in the northern Afghan city of Kunduz.

In his speech on Monday, Hezbollah Secretary General Sayyed Hassan Nasrallah denounced the bombing that took place inside a mosque in Kunduz province a few days ago in Afghanistan.

He stressed that the perpetrator is “Daesh, the Wahhabi terrorist organization”, allocating the responsibility of the attack to the US given that it previously transferred Daesh members from Iraq to Afghanistan.

Nasrallah said that “Daesh job today is to create a state of internal turmoil that would lead to a civil war in Afghanistan”, emphasizing the responsibility of Afghan authorities to protect its citizens regardless of their color or sect.

Nasrallah also addressed the electricity crisis in Lebanon, revealing that multiple offers have been made from Eastern and Western states to solve the local problem.

Furthermore, he stressed the need to respond to the proposal made by Iranian Foreign Minister Hossein Amir Abdollahian, which hinged on building two electric power plants in Lebanon, thus largely alleviating the country from the current power outages.

The Secretary-General also demanded the Lebanese Government to prioritize dealing with the electricity crisis by placing it at the top of its agenda in its next session, wondering along the way about the existence of a US veto obstructing the solving of this issue on the internal level.

This attempt by the US would ease the privatization of the energy sector once it collapses.

To counter this sabotaging, he called on the Lebanese government to request an exception from the US, adding, “Let’s allow the Lebanese companies to buy diesel from Iran, as we will subsequently offer them facilitations before completely withdrawing from this issue.”

Nasrallah also touched on the subject of the Beirut Port investigation, stating that the current judge handling the case, Tariq Bitar, is exploiting the victims’ blood in service of political goals as he continues the path set by his predecessor.

Countering doubt about Hezbollah’s commitment to the search for the truth, he asserted the party’s unwillingness to abandon the investigation, notably as it was scathed on the moral, political and reputational level by the Beirut Port explosion.

The Secretary-General wondered how the judge has not yet concluded who the importer of the nitrate was, viewing his approach to the investigation as erroneous and one that will not lead to the truth. He called on assigning an “honest judge” to lead the investigation.

Nasrallah also made an appeal to the Supreme Judicial Council, decrying the unlawful practices of Bitar and suggesting that the government solve this issue in case the Council remains idle towards this issue.