Haze in Iran is a product of war: Environment chief 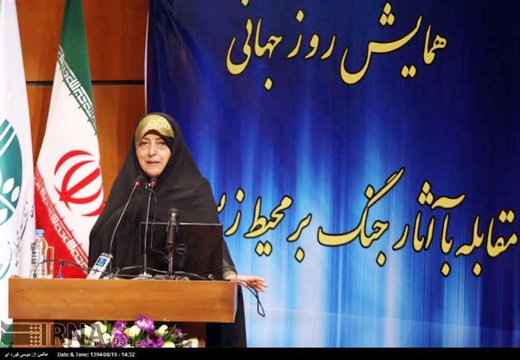 We should bring back security to the region and thus preserve the environment, Ebtekar said.

Iran is in a very sensitive environmental situation where ramifications of war and insecurity [in the region] such as haze can be felt, the director of the Environment Protection Organization told a conference Tuesday to mark the International Day for Preventing the Exploitation of the Environment in War and Armed Conflict.

What appears next is the translation of what else Masoumeh Ebtekar said at the gathering as reported by the Islamic Republic News Agency on November 10:

The conference is one of a few gatherings held in the world to assess the impact of war and violence on the environment.

It has been a few years since governments and international institutions began to take notice of the impact of war on the environment. National and international organizations can play an effective role on this front.

Iran started taking measures in dealing with the impact of war on the environment many years ago. One such measure was the formulation of a bill on compensations. Under the bill, Iran submitted a report to the United Nations on the destructive effects of war on Iran’s environment, including oil and air pollution, and asked for a big chunk in damages.

For instance, haze and particulates are a product of war which has bedeviled our country, that problem is escalating by the day.

Haze originates from countries such as Iraq, Kuwait, Syria and Saudi Arabia. It also comes from some areas within the country. Separate studies are being conducted on the issue in the provinces.

Water crisis in Iran and the wider region is an important issue and its settlement requires water diplomacy.

What the 11th government did with the backing of the Supreme Leader and the president as part of nuclear talks to have unfair sanctions lifted reflects the success of the diplomacy Foreign Minister Mohammad Javad Zarif and his colleagues employed.

Mr. Zarif and his colleagues did a great job. In a world where divisions mostly lead to war, his measures are valuable. The Iranian nation has thanked Mr. Zarif and his negotiating team multiple times; today we want to extend special thanks to his team, as well.

As the nuclear deal has proceeded in line with national interests so far, there is hope that it helps remove the sanctions so that Iran can play its major role in the region. Actually, that role has already started.

The region has become insecure thanks to the presence of IS and other terrorist groups; we should bring back security to the region and thus preserve the environment.