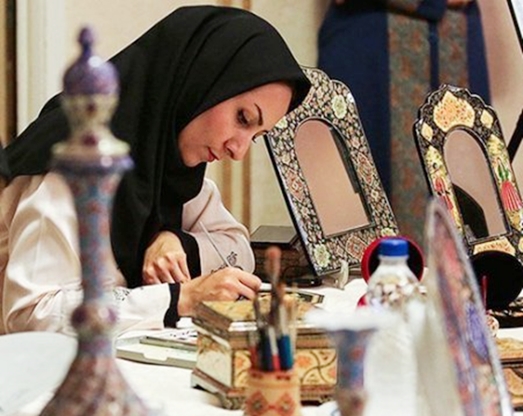 The sales of items crafted by Iranian artisans in the 26th Iran Handicrafts Exhibition broke the record set last year.

“The total sales amounted to nearly IRR58bn ($1.7m), up from IRR28bn ($811,000) in the previous event,” said Pouya Mahmoudian, director general of the Handicrafts’ Export Office at Iran’s Cultural Heritage, Handicrafts and Tourism Organization.The final figure does not include the IRR10bn ($290,000) worth of handicrafts ordered by a Dutch trade delegation.
“Once obstacles blocking Iran’s reconnection to the international banking system are removed, we can add the extra $290,000 to the total sales figure,” she said. Mahmoudian hoped that sales will continue to grow in future exhibitions.
“We will begin making plans for the next year’s expo earlier and continue making policies for the benefit of the handicrafts industry,” the official said.
The 26th National Handicraft Exhibition was held on 25-30 May in Tehran’s Mosalla. Last year’s event broke a record when craftsmen sold IRR28bn ($811,000) worth of arts and crafts, surpassing the previous year’s IRR12bn ($347,000).
This year, about 567 stalls were rented out to artisans, organizations, unions and e-commerce websites that sell handicraft products, up from 400 last year. Also, 15 charity organizations were given free stalls to help them raise money.