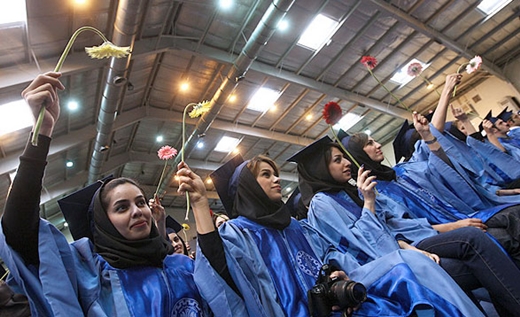 Women’s social involvement and their active presence in cultural, political and social activities is an indication of how economically developed a country is. A country, in which half of human resources has been kept inactive because of cultural obstacles and traditional beliefs, has a long way to go before being characterized as a developed nation.

Arman-e Emrooz daily ran an opinion piece entitled “Inequality Chips away at Creativity” in early March by Fatemeh Daneshvar, the head of the Social Committee of Tehran City Council, on female executives, the role of women in the country’s development and why they remain under-represented in top leadership positions. The following is a partial translation of the piece:

For years, Iranian women have stolen men’s thunder by claiming educational positions and studying in postgraduate levels, but they have yet to prove eligible for top managerial levels and civic engagement. There is no denying that female participation in social activities, especially in charitable and religious affairs, has been manifold compared with pre-revolution years.

Where do Iranian women stand?

It is simple economics: nine women represent their constituencies in the ninth parliament and three women hold a seat on Tehran City Council. Women account for 2-3 percent of managerial posts in executive bodies. A comparison between Iran’s statistics and those of other countries such as Sweden and Norway – which have the highest rate of female representation in top economic and political managerial positions – reveals Iranian women have not done enough to make their presence felt in society.

Among the factors that have played a role in sidelining Iranian women and stopping them from growing stronger in top positions of social effectiveness and decision-making, cultural issues are of high importance.

At a time when a large number of men are weary of shouldering the family’s [heavy] economic burden, and women have taken shaky, still hopeful, steps toward achieving higher education by tapping into [mass] media and asserting their individuality, attempts to sideline half of [the country’s] population under different excuses – women cannot handle certain jobs due to their physical weakness, for instance – do not serve anybody’s interests.

Men and women are not similar

In our culture, women’s sole responsibility is defined as motherhood and wifehood. Women assume and perform these roles owing to their intrinsic talent. Those women who neglect their motherhood and marital responsibilities due to their engagement in social duties in fact fail to tap into the biggest God-given gift, and they are branded as incomplete people with tunnel-visioned mindsets.

But it would be a fatal mistake if we force women to focus only on their main responsibilities – protecting the foundation of the family – deprive them of training and nurturing other aspects of their lives, and prevent them from playing creative social roles and gaining the least financial and mental independence. The consequences of such a mistake would affect the fabric of society in the first place.

A balance between emotional and life needs

A look at developed nations – where the state of family is regrettable, emotional bonds have been weakened and the birth rate has decreased – clearly reveals the one-dimensional growth of humans. It also gives substance to concerns about the marginalization of women’s motherly and spousal roles in a society where women are seriously involved in top social and economic activities.

But it is not an impossible job to solve this problem. We shouldn’t try to throw obstacles in the way of women entering social scenes in a bid to prevent such a problem from arising. […]

What is the solution?

Raising awareness and training are perhaps the solution. Now that our girls show interest – more than before – in academic studies, we can and have to tap into this capacity to give a purposeful education to the women who are likely to get into the job market and claim part of managerial roles in the country in the future.

Through this targeted training process, we should try to raise these girls’ knowledge about and understanding of their own real needs. This would help women strike a balance between their noble emotional and life needs – including raising a family and rearing children – and other needs such as independent and meaningful involvement in economic and social activities.

As a result, they can grow on many fronts as far as their individual and social characters are concerned. Only under such circumstances can we protect the family foundation and cultural values as we witness women participate in the development process and claim a bigger share in running the country’s affairs.