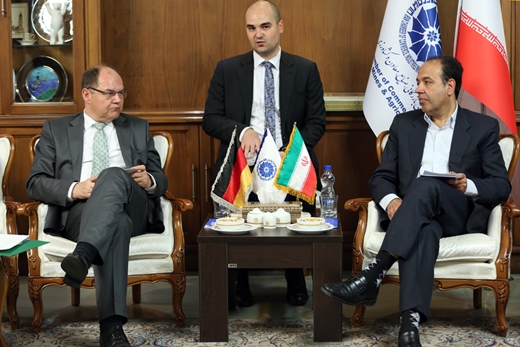 Mohsen jalalpour the head of Iran chamber of commerce, industries, mines and agriculture in a meeting with Christian Schmidt the minister of food and agriculture of Germany who is heading a high ranking delegation from agriculture organizations, highlighted the bilateral works and investment in water management projects, conservation of water resources in agricultural process, updating the planting methods to produce organic products.

Jalalpour emphasized the number of meetings with German delegations after JCPOA in Iran chamber of commerce comparison with other EU delegations and said: these missions show the eagerness of German politicians to expand economic ties with Iran.

Head of Iran Chamber highlighted the environmental crisis and shortage of water in next decades for country and region and added: we believe due to mismanagement of water resources in agriculture and industry not only in our country but also in our neighboring countries, we would face obstacles and there are lots of rooms to do research and updating the technologies to avoid side and effects.

Jalalpour mentioned the obstacles of exporting Iranian products like dried fruits and nuts during the sanctions by ministry of food and agriculture of Germany and said: Persian production benefits the high ranking qualities which are approved with consumer feedbacks by requesting our goods, but some restraints avoided to introduce our goods to the chain stores and EU markets. We anticipate being in equal competition with others producers.

For his part German Minister of Food and agriculture Christian Schmidt highlighted the good atmosphere and opening new chapter in economical relations with Iran after JCPOA and said: Some German agricultural activist are in this mission to find their counterparts and fact finding the market to expand their bilateral work with Iranian private sector.

He mentioned the COP21 conference of Paris and said: due to the climate changes of the globe, all participants of conference agreed to control the water resources and in this regards we are ready to transfer the technology to provide the food of 9 billion population of the world.

Considering the scientific ranking of Iran in the world, Schmidt quoted that: in research center of agriculture ministry approximately one thousand scientists and professors are studding in various projects and they are ready to connect with Persian scientific and educational centers to exchange their experiences in agrochemicals, seeds and veterinary.