Furore over the Arrest of an Unveiled Mascot in Saudi Arabia 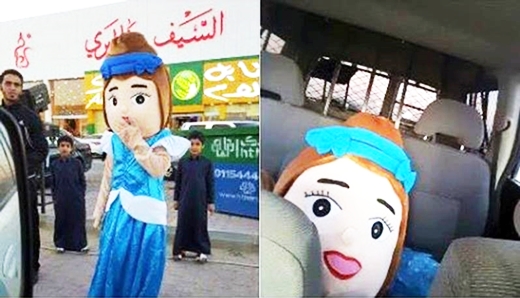 Saudi Arabian media requested changes to the Committee for the Promotion of Virtue and the Prevention of Vice, criticizing their rough behavior and irrational operation in arresting an unveiled female advertising mascot.

As reported by Al-Alam News Network, Saudi Arabian media outlets have been scathing in their condemnation of the Committee’s actions for two reasons: their confiscation of a female advertising mascot costume (worn by a man) who had been greeting visiting shoppers; and the subsequent violent behavior of a Committee member towards a woman, beating her up in front of cameras.

Last week, a man dressed in a full-size promotional mascot costume, who was inviting pedestrians into a shop, was arrested by Saudi Arabia’s Committee for the Promotion of Virtue and the Prevention of Vice.

The man who and his costume were detained by police and taken to the police station. He stands accused of not clothing his mascot in line with Islamic dress codes. 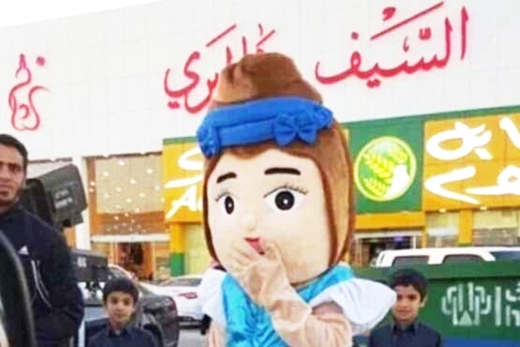 In Alriyadh newspaper, Hasna Abdolaziz Al-Qaniair asked that Committee members be forced to change their extreme thoughts, especially those in confronting women. He said, “Some the committee members think that promotion of virtue and prevention of vice is exclusively their job, and that others are not allowed to do the same to them.”

He added, “Men in this committee must be forced to accept changes in civilization. They should be aware that many citizens spend billions of Saudi Arabian Riyals on short- or long-term holidays outside the country. They choose to go abroad entirely because of how they are treated by these guys [Committee members] – however, this money would be better spent domestically.”

In Aljazeera newspaper, Muhammad Al Shaik wrote, “Even though there have been different people with different levels of stringency in charge of this committee, it still remains unchanged in implementing their reforms.”

Muhammad Al Shaik said that the only option which will make the Committee change is for it to join the Ministry of the Interior, a move which he calls an appropriate and moderate solution.

Eid Sad Al-Mosa, writing in another Saudi newspaper, Alwatan, also called for transparency and clarity in Committee operations, so that society can stretch out a trusting hand towards them, building a bridge of trust between the Committee and the people.

He emphasized, “The Committee for the Promotion of Virtue and the Prevention of Vice has two options on the table. Either they should try to achieve the people’s trust, or else they must keep covering up and making excuses every time one of their members makes a mistake. In this case, they’ll lose society’s trust and their connection to the people.”

He continued, saying that, “It’s true that individual mistakes are an inseparable part of human nature, but that doesn’t mean that an organization should constantly be struggling to defend and excuse their members’ mistakes in behaviour. For once, we really want to hear that the Committee is questioning their own members, but so far it has never happened.”