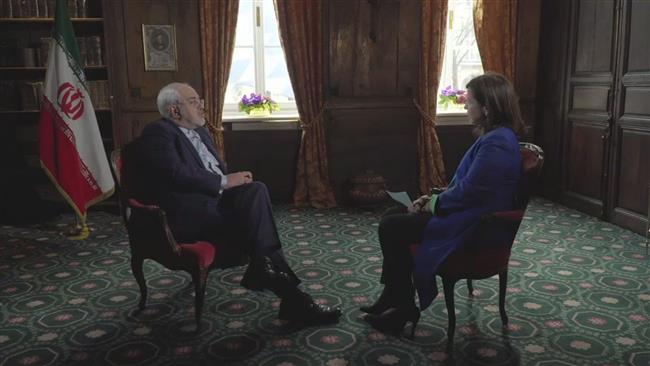 Amid ongoing US and Israeli attempts to portray Iran as an “aggressive” party, Foreign Minister Mohammad Javad Zarif reaffirms that the Islamic Republic’s missiles are a mere means of defending the nation against enemy threats.

“Missiles are our defensive means,” he told the BBC’s chief international correspondent Lyse Doucet in an interview aired on Monday, adding, “We’re a sovereign state. [The projectiles are] for our defence and for being ready to defend ourselves.”

The Islamic Republic has, on numerous occasions, asserted that its missiles are not designed to be capable of carrying nuclear warheads, and that it is not involved in such missile work, which is prohibited by the Resolution.

The US, however, also imposed new sanctions against Iran in early February as part of bids to ratchet up pressure on the country, chiefly over Tehran’s missile program.

Further supporting Iran’s defensive work, Zarif recalled the foreign-backed war imposed on Iran by the former Iraqi regime in 1980s, “when everybody in the international system, including the United States” was backing the Arab country under former dictator Saddam Hussein against the Islamic Republic.

“Our people do not forget the fact that they were being bombarded. Everybody was providing assistance to the aggressor and no one, absolutely no one, gave us even the rudimentary means of defence,” he added.

‘Iran not an easy target’

The Iranian top diplomat was then asked for comments on the US, Israel, and Saudi Arabia’s threats of military action against the Islamic Republic.

Elsewhere, Zarif addressed the issue of Iran’s 2015 nuclear deal with six world countries, including the US, saying Washington opted to sign the accord “because it didn’t have any choice.”

The US, he said, had already exhausted the means of applying pressure on the Islamic Republic, including sanctions.

“Those sanctions produced the exact opposite political outcome. They put economic pressure on Iran, but the Iranian people resisted. The Iranian people stood up against those pressures,” said the top Iranian diplomat.

He described the deal, known as the Joint Comprehensive Plan of Action, as a “reasonable agreement,” saying it “is not everything that they wanted, nor was it everything we wanted. But it’s a reasonable middle ground, and I believe if the previous administration had other options, it would have exercised them.”

Trump has adopted a harsh language towards Iran, threatening to “tear up” the nuclear deal, calling Iran “terrorist state number one,” and imposing new sanctions against the Islamic Republic.

‘US never been friendly’

He also dismissed the idea that the new US administration’s attitude towards Tehran was a major departure from its predecessors, saying Washington’s hostile approach towards the Islamic Republic has remained unchanged over the

“So, it’s not as if we’re moving from very friendly relations into hostile relations. The United States policy towards Iran has never been friendly for the past 38 years. It has always been hostile, and our people have shown that hostility doesn’t receive a positive response from the Iranian people.”