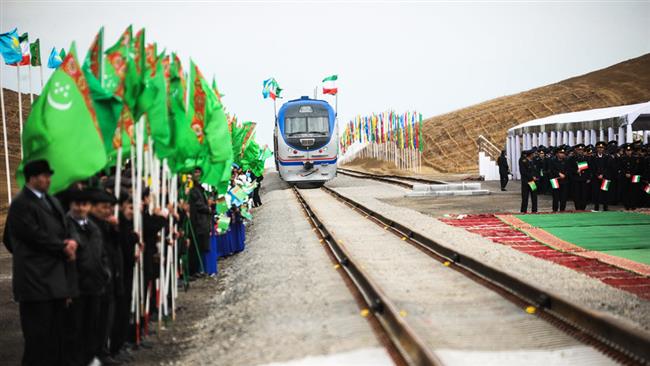 The first cargo, including 45 freight wagons, carried on the Silk Road railway has crossed the Incha-Burun border with Turkmenistan into Iran.

The first cargo carried on the Silk Road railway has entered Iran from the Central Asian nation of Kazakhstan, local officials said.

The cargo, including 45 freight wagons, crossed the Incha-Burun border with Turkmenistan into Iran, local officials in the Golestan province said.

It followed the signing of a cooperation document between Iranian and Kazakh railway officials, head of the Northeast Railway 2 Mohammad Reza Qorbani said.

In their joint session, the mode of cooperation between Iran, Turkmenistan and Kazakhstan and other countries for transit and rail transportation was discussed.

“At the session, existing infrastructure and potential of the Islamic Republic of Iran Railways and neighboring countries, Iran’s development plans and active transit corridors passing through Iran were discussed,” Qorbani said.

They also decided to work on developing the Incha-Burun-Bandar Abbas line as the new Silk Road route, he said.

The railway linking Iran to Turkmenistan and Kazakhstan at a length of 926 kilometers was inaugurated last year.

Iran and Central Asian nations have stepped up work on establishing an integrated freight railway network to link Asia to the Persian Gulf, Europe and Africa.

It is part of an ambitious Chinese plan to revive the Silk Road which would require building of a network of roads, railways, ports and airports.

Head of the Islamic Republic of Iran Railways (IRIR) Abbas Nazari said the Kazakhs were interested in investing in Bandar Shahid Rajaee for construction of silos in order to store its wheat crop in the port and facilitate shipments.

Nazari said Iran, Kazakhstan and Turkmenistan, which are linked by sea in the Caspian Sea, were working on a unified transit tariff.