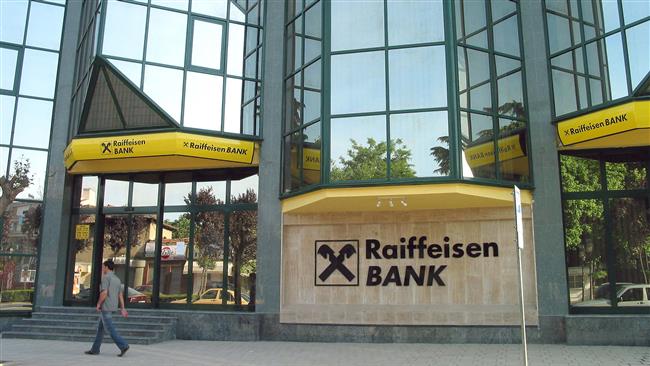 Austria’s Raiffeisen Bank International (RBI) says it wants to open a branch in Tehran “as quickly as possible,” becoming the first foreign lender to set up shop in Iran after the lifting of sanctions.

RBI is in “intensive talks” with Iranian banks as Tehran is rejoining international banking system, its board member Peter Lennkh said in an interview with Austrian newspaper Wirtschaftsblatt.

“We are already working on the preparations and want to offer our customers everything the sanctions relief allows,” he said.

Lennkh said RBI had a very good deal of business in Iran before sanctions were imposed on the country in 2012 and “would like to be again the leading bank in the Iran business.”

International lenders are linking up, though slowly, with their Iranian counterparts using global transaction network SWIFT.

As of this week, Iran is able to use the worldwide transaction network which handles cash transfers and letters of credit between financial institutions.

Central bank officials have said banks from European countries including Germany, France, Britain and Italy, have been in talks to open branches after the lifting of sanctions.

Commerzbank has said it is reviewing its policy of not doing business in Iran.

Other major banks are cautious, however, seeking all the assurances they need to return to Iran. They are deterred by Washington’s heavy fining of some lenders in the past for doing business with Iran.

“It could be a US policy to say, ‘careful, it’s complicated’, so people don’t understand what’s going on and think they the sanctions remain in place,” the AFP news agency quoted him as saying.

In 2014, the US imposed a record $8.9 billion fine on France’s BNP Paribas while German giant Deutsche Bank took a $258 million fine for doing business with Iran.

Coville lamented a “strategic mistake which is today being paid for” to allow the US to place “direct pressure on the European banks” when it comes to a return to Iran.

“Politically, this is lamentable on the part of the Europeans. This is now a financial and geopolitical weapon that the United States won’t shirk from using again in other circumstances.”

However, Europe’s rush for resurrecting trade with the global energy superpower sitting on the worlds’ biggest oil and gas reserves combined as well as massive mineral deposits is set to trump existing reservations.

Italy and France signed initial deals worth more than $40 billion in a variety of fields — from oil and gas to car manufacturing, construction, health and agriculture and clean energy development — last month during President Hassan Rouhani’s visit to Europe.

Major groups would need financial support to seal contracts and leading banks would inevitably move in to reopen their offices in Iran.

Seeking to reassure, Paris last Tuesday unveiled an accord offering state guarantees to back French investments in Iran through credit management firm Coface in order to cover onsite non-payment risks.