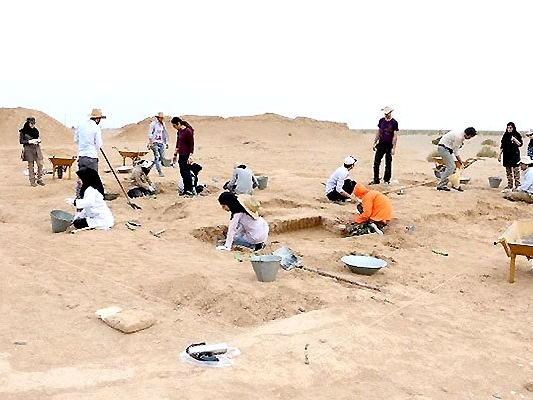 According to investigations, Feizabad had been settled and urbanized during the Ilkahnid era; the city comprised two important localities – Arg and Sharistan. “The first season of excavations in the site was carried out on the Sharistan part of the site, which uncovered valuable information about archaeology and architecture of the Ilkhanid era,” he told Mehr.

“The present expedition seeks responses to questions of settlement patterns and architectural shifts in the Arg section, and other architectural features of the site. The fourth season of excavations revealed a structure dating back to times even before the era most architectural features belonged. The adobe building with gypsum plastering encompassed a rectangular space with large arch plates, and could have potentially have had an arched dome at the time of construction.”

“The approximate dimension reveals 10m width by 20m length, including unexcavated parts. It still requires more excavation in the western part to find about the possible application of the chamber. Most probably, the space belonged to the higher classes of the social strata of the time,” Shadmahani said.

The excavations also uncovered pottery objects of the Ilkhanid era.