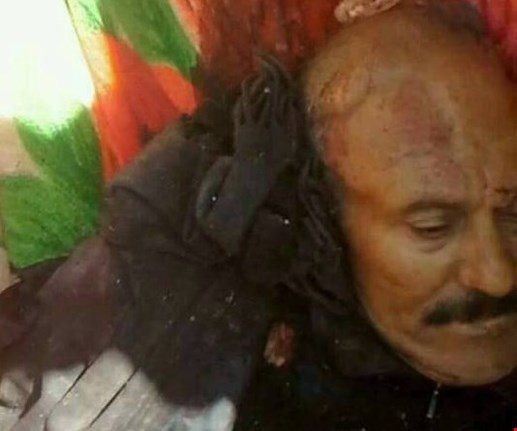 A media advisor to the Yemeni Supreme Political Council, Ahmed al-Habishi, says former Yemeni President Ali Abdullah Saleh has been killed in an area controlled by the UAE air force.

Reports quote him as saying that UAE fighter jets, which belong to the Saudi coalition, carried out airstrikes on Ali Abdullah Saleh’s positions last night.

According to a Farsi report by Mehr News Agency, Al-Mayadeen has quoted the Yemeni official as saying that reports on the death of Mohammad Abdullah al-Qousi, the pro-Saleh Interior Minister, are not confirmed.

Meanwhile, Yemen’s Interior Ministry has issued a statement confirming the death of Ali Abdullah Saleh, the country’s ousted president, during clashes in capital Sana’a.
The statement did not mention how he was killed or who killed him. It just stated that “the crisis created by traitorous militants ended in death of their leader and a number of criminal elements.”

The ministry accused Saleh of creating “chaos” in the country, cooperating with “militias of aggression” and providing help to “extremist militias.”
The ministry added that the Yemeni forces, backed by fighters from the popular Ansarullah Houthi movement, were in full control of all positions previously held by Saleh’s militias in Sana’a.

“The Interior Ministry announces the end of the crisis of the treason militia and the killing of its leader and a number on his criminal partisans,” the statement reads.
“They killed a number of people, closed the roads, stirred up chaos, disturbed the peace and co-operated directly and indirectly with the aggressive countries [Saudi coalition]. They attempted to shut down the city’s entrances as the [Saudi coalition] jets kept bombarding to mount the attacks so as to carry out their plots and intensify civil war. This forced the Interior Ministry to act quickly to resolve the situation.”

The Yemeni Interior Ministry described this as a “victory” saying that the Interior Ministry thanks Almighty God for this decisive victory in the battle for freedom and independence.
Meanwhile, Yemen’s Ansarullah Leader, Abdul-Malik al-Houthi, has stated that by this (victory) Saudi Arabia, the United Arab Emirates, the United States and Britain suffered a historic defeat.

“Today is a wonderful and great day. Today is the day in which the conspiracy collapsed. The plot against Yemen was defeated within 3 days and we congratulate the Yemeni people,” added al-Houthi.

Since November 29, armed clashes sparked by forces loyal to Saleh, have continued against Houthi forces that are at the forefront of a retaliatory war against the Saudi-led military coalition. Saleh loyalists accused the Houthi fighters of raiding their bases across Sana’a and beyond, an allegation that the Houthi leader has strongly denied.

Saleh stepped down following a 2011 uprising after being in power for 33 years. His resignation in 2012 paved the way for Abd Rabbuh Mansur Hadi to assume power as Yemen’s president. Hadi, however, resigned in 2014 and fled the country to Saudi Arabia.
The Houthi movement assumed responsibility for running state affairs after Hadi’s escape threw Yemen into a state of uncertainty and threatened a total security breakdown in the country, where an al-Qaeda affiliate was present.

Later on, Saleh joined forces with the Houthis and the Yemeni army to defend the country against the brutal Saudi aggression, which started in March 2015.

On Saturday, however, Saleh officially announced the end of his alliance with Houthis, claiming that the movement had imposed hunger on the country and worked as an ally of Iran.