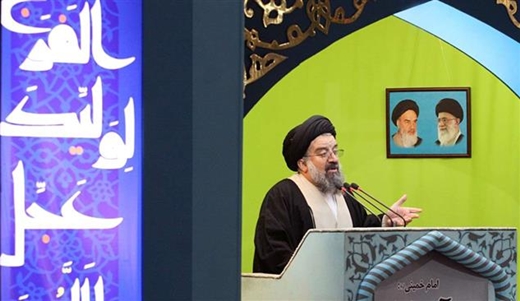 Ayatollah Ahmad Khatami has said that everyone is entitled to express their views about the negotiations, adding all people should help the negotiators accomplish their tasks.

A senior Iranian cleric has urged support for the country’s negotiators involved in nuclear talks with six world powers, saying potential criticism should not undermine the negotiators.

In a sermon to worshippers at the weekly Friday Prayers, Tehran interim Friday Prayer leader Ayatollah Seyyed Ahmad Khatami described as “a sensitive issue” the ongoing nuclear talks between Iran and the five permanent members of the UN Security Council – Russia, China, France, Britain, and the United States – plus Germany.

While everyone is entitled to express their views about the negotiations, Ayatollah Khatami said, everyone should help the negotiators – “warriors on the diplomacy front” – to accomplish their tasks.

Ayatollah Khatami also said that the authorities, in return, should avoid considering any criticism or gathering aimed at discussing the negotiations as destructive.

Such gatherings must, however, be aimed at boosting the Iranian negotiators’ bargaining power and strengthening their position in the talks, he added.

Diplomats and experts from Iran and the six other countries are in talks to hammer out a comprehensive nuclear deal by June 30, a deadline set by the negotiating sides themselves.

The two sides reached mutual understanding on the fundamental parameters of a final accord in Lausanne, Switzerland, onApril 2, and have since been working on the text of the deal.