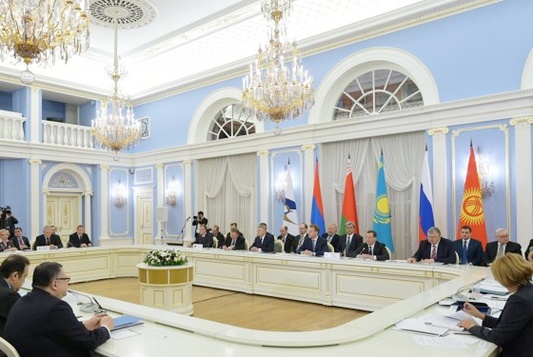 “As a first step, we see the conclusion of an interim agreement with Iran on free trade as a characteristic feature, which may result in the reduction of duties on some exports of goods, which will allow us to maximize the benefit from trade with Iran,” Nikishina said in an interview with TV channel Belarus 1. Furthermore, she called Iran “a very interesting partner” for the alliance.

Iranian expert on international strategic issues and former Iranian ambassador to Armenia, Mohammad Farhad Koleini, discussed in an interview with Sputnik how Iran sees this initiative and what this trade alliance means to it.
“In the current atmosphere of mutual trust with countries of this economic alliance, Iran is optimistic about the expansion of the partnership,” Koleini said. “As you know, in this year, which could be called the ‘Year of deepening economic relations of the Eurasian Economic Union with third countries and integration of key unions,’ there are still problems between the principal members of the Union in terms of convergence and quality of integration,” the analyst added.
According to the analyst, the first stage of EEU cooperation with Iran would be the issue of reducing customs duties, which is currently being actively considered. He noted that it is clear that the parties are not expecting any miracles from each other, but once this issue is resolved it will give Iran considerable opportunities in the fields of trade in food, chemicals and construction materials, as well as exports of engineering services and a number of other spheres.
“It is important to realize that the first step in this direction was taken by Armenia, Iran’s only neighbour with full membership in the trade union,” Koleini said.
The analyst also stressed the importance of studying the barriers that appear at a domestic level between members of the Union, as well as the possibility of reducing the economic gaps between them.
“On the other hand, cooperation with the EEU, as well as in the long term — with some members of BRICS, such as China and Russia, can be very advantageous for Iran. The leading role of Russia, given its capacity and capability, and those of Kazakhstan and Belarus, has been part of Iran’s vision for a long time,” the analyst said.

He noted that it is obvious that cooperation should not hinder the development of Iran’s relations with other important partners as well.

Talking about what kind of results Iran expects from the Eurasian Economic Commission analysis and when it will be possible to sign the agreement to establish the free trade zone between Iran and EEU, Koleini said, “Cooperation with Iran will help EEU countries to strengthen cooperation on the North-South corridor project.”

He added that identification of all the nuances of the economic benefits of these projects and the process of resolving legal issues will take time, as the population of the countries belonging to the EEU together account for more than 180m people, over an area of 20m square km, making it a lengthy process.

Furthermore, the GDP of these countries amounts to over $4 trillion a year. “These indicators determine the stability of economic cooperation with other countries of the Union. There is no need to look at cooperation between Iran and the EEU as being politically motivated. It should be borne in mind, that it is due to Iran that a vast joint economic bridge from Lisbon to the Persian Gulf may likely be created,” Koleini concluded.