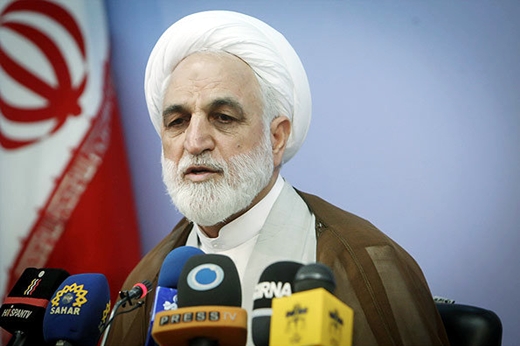 Prosecutors allege that the head of the Ettela’at daily has acted against a directive of theirs which is based on a decision of the Supreme National Security Council.

A recent republication by the Ettela’at daily of an interview former President Mohammad Khatami gave to Lebanon’s As-Safir daily has caused quite a stir on the country’s media stage.

Judiciary Spokesman Gholamhossein Mohseni Ejei dedicated a major part of his news conference on Sunday to the issue. The following is the translation of part of his comments as reported by Vaghaye-e Etefaghiyeh daily on December 14:

Prosecutors at the Special Court for the Clergy summoned [Mahmoud] Doaei twice. The first time, he made a promise [not to release news stories about and images of the former president]. In light of the fact that the daily went ahead with its measures, he was called in once again.

During the second appearance, he was arraigned and released on bail. The case is set to be sent to court for trial. The other day, Doaei made statements in his defense. Prosecutors allege that Doaei has acted against a directive of theirs which is based on a decision of the Supreme National Security Council and that charges should be brought against any person or media outlet that violates the directive.

Prosecutors do not issue rulings, they issue judicial orders. As long as the council’s decision remains in place, prosecutors can issue indictments against individuals. And as long as judicial orders remain in place, they are legally binding. Failure to comply with such orders carries punishment.

A word with a president who appreciates our problems